The origin of the name, "Duluoz" 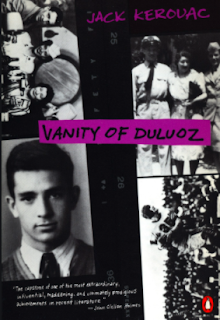 We've written about The Duluoz Legend in the past (click HERE). Duluoz was Jack Kerouac's pseudonym for himself in his works that would eventually comprise one vast book about his life a la Proust (see intro to Big Sur).
Today I got an e-mail from a reader (thanks, John) about the significance of the name, so I revisited my above post and realized that I left out the origin story. So here it is:
According to Kerouac biographer Paul Maher Jr., Jack first came up with the name as a pseudonym for himself in Vanity of Duluoz (see Kerouac: His Life and Work, pp. 93-94).
According to Satori in Paris, it's a variant of the Breton surname Daoulas and one which Kerouac invented in his "writerly youth." Jack came across the name Daoulas, the name of a Greek family in Lowell, while working at The Lowell Sun. The intro notes to "The Joy of Duluoz" in Atop an Underwood were quite instructive in this matter.
In case you wondered, it's pronounced as 3 syllables with the accent on the first: DEW-loo-oz.
Posted by Rick Dale, author of The Beat Handbook at 11:34 AM