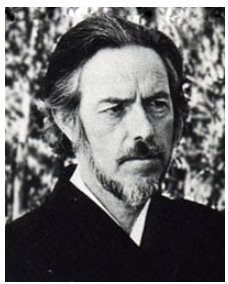 Spiritual entertainer and philosopher/writer Alan Watts died on this date -- November 16 -- in 1973. He appeared in two Kerouac novels: as Arthur Whane in The Dharma Bums and as Alex Aums in Desolation Angels.

Here's an excerpt about Watts from Gerald Nicosia's Memory Babe: A Critical Biography of Jack Kerouac from when Jack was living with Gary Snyder in his shack in Mill Valley up above Locke McCorkle's house:


He [Kerouac] and Gary went to dinner at Alan Watts', and Jack and Watts got on fine, Jack liking his "sincerity." (1994, University of California Press, p. 518)

Kerouac said the following about Watts (Whane) in The Dharma Bums:


I went out to the bonfire to hear Cacoethes' [Rexroth's] latest witti­cisms. Arthur Whane was sitting on a log, well dressed, necktie and suit, and I went over and asked him "Well what is Bud­dhism? Is it fantastic imagination magic of the lightning flash, is it plays, dreams, not even plays, dreams?"

"No, to me Buddhism is getting to know as many people as possible." And there he was going around the party real af­fable shaking hands with everybody and chatting, a regular cocktail party. (1976, Penguin Books, p. 195)

Watts has his critics, but I like how he presents Eastern concepts for the Western mind in his writing and also in his speaking (much of which is available on YouTube as well as official sites like alanwatts.org). I posted about Kerouac and Watts on July 24, 2011 (click here).

Kerouac and Watts had two major -isms in common: Buddhism and alcoholism, the latter likely killing them both although Watts made it to 58, whereas Jack was only 47 when he died.


Posted by Rick Dale, author of The Beat Handbook at 10:18 AM