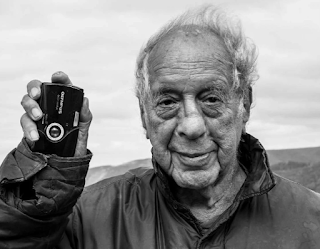 Photographer/filmmaker Robert Frank was born this date -- November 9 -- in 1924. We said a bit about Frank on the occasion of his death recently (click here), so we won't dwell on details except to say that he and Jack Kerouac were close; despite that, Frank only appeared once in Kerouac's works -- as Robert Frank, not under pseudonym, in the short piece "On the Road to Florida" which appeared in Evergreen Review in January 1970 and later in Good Blonde & Others (1993).

I hope you'll check out my other post about Frank -- it includes a link to the acclaimed film, Pull My Daisy, narrated by Kerouac and bringing to film the third act of his play, Beat Generation. You can also see Frank's silent 1959 short film of Kerouac, Ginsberg et al. in NYC's East Village by clicking here. The woman that Kerouac is having the intense conversation with around the 2:10 mark is Mary Frank, Robert's wife.


Posted by Rick Dale, author of The Beat Handbook at 10:37 AM