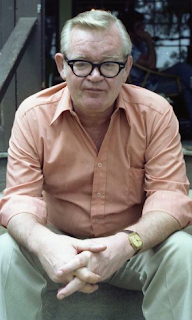 Writer John Clellon Holmes, one of Jack Kerouac's closest friends, was born on this date -- March 12 -- in 1926. He appeared in a number of Kerouac's works: as Ian MacArthur in On The Road; Mac Jones and Balliol MacJones in The Subterraneans; Wilson and John Watson in Visions of Cody; James Watson in Book of Dreams; Clellon Holmes in Maggie Cassidy; and, Eugene Pasternak in Doctor Sax.

For an in-depth look at Holmes and his relationship with Kerouac, get yourself a copy of Ann and Samuel Charters' Brother Souls: John Clellon Holmes, Jack Kerouac, and the Beat Generation (note the proper use of the Oxford comma in that title -- thank you, Ann and Samuel). I read this book on the basis of a glowing recommendation from my great friend, Richard Marsh, whose judgment on books I trust very much. It's now one of my favorite Kerouacian biographies, right up there with Gerald Nicosia's Memory Babe: A Critical Biography of Jack Kerouac.

I realize today is also Jack's birthday, but we will take that up in a separate post.

Posted by Rick Dale, author of The Beat Handbook at 8:38 AM

Happy Birthday to John! Thank you for remembering.