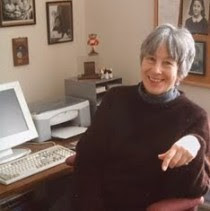 According to reports on-line, Helen Weaver, who we interviewed for The Daily Beat in November 2019 HERE, died yesterday, April 13. She appeared in two of Jack Kerouac's works: as Ruth Heaper in Desolation Angels and as Eileen Farrier in Book of Dreams (expanded edition).

Ruth was a prolific literary translator and we reviewed her excellent memoir about her time with Jack Kerouac (yes, they were paramours), The Awakener: A Memoir of Kerouac and the Fifties, HERE.

I always greatly appreciated that she granted me an interview for this blog (making her one of two people who knew Kerouac that I've interviewed, the other being Al Hinkle). I hope her soul is flying on the wings of angels as she enters the great unknown.

Posted by Rick Dale, author of The Beat Handbook at 5:23 PM