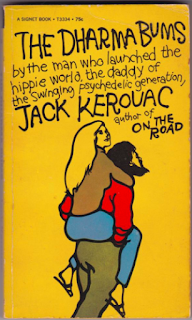 Jacob Rabinowitz, whose book -- Blame it on Blake: a memoir of dead languages, gender vagrancy, Burroughs, Ginsberg, Corso & Carr -- we reviewed HERE in May 2019, has had two poems published in BUDDHIST POETRY REVIEW (click HERE). Check them out.

The connection to Jack Kerouac? Jack studied and knew a lot about Buddhism, referencing it frequently in his works. Four of his books are specifically about or are heavily influenced by Buddhism: Some of the Dharma; Wake Up: A Life of the Buddha; The Scripture of the Golden Eternity; and, The Dharma Bums (my favorite Kerouac work).  And that's not counting Desolation Angels, which has lots of Buddhist themes. The only book he took with him for 2+ months on Desolation Peak was Dwight Goddard's A Buddhist Bible and Jack had a practice of re-reading sections of "The Diamond Sutra" daily. That's according to John Suiter in Poets on the Peaks, but Thomas Holloway pointed out in a comment that Jack references in Desolation Angels another book he had up there, The God That Failed (see comment below). So it may be that Jack had more than A Buddhist Bible at hand. Maybe A Buddhist Bible was the only book he took with him, but there were other books awaiting him that had been left there by previous occupants? What do you think?

UPDATE 4-11-21
I've learned since posting this (never too old to learn) that Jack had a number of books at his disposal on Desolation Peak. How they got there is a mystery to be solved. Below is a list of books he had up there:
1. A Buddhist Bible by Dwight Goddard (ed.)
2. A John Barrymore biography (Good Night, Sweet Prince)
3. Devils in Baggy Pants by Ross Carter
4. A Kathleen Norris novel (title?)
5. The God That Failed
6. A "cowboy book" (title?)
7. A medical book (title?)
8. A synopsis of Shakespeare's plays (Tales from Shakespeare ed. by Charles and Mary Lamb)
Posted by Rick Dale, author of The Beat Handbook at 10:12 AM

Hey Rick- check this out. From page 19 of my copy of Desolation Angels:

"I have a book up there, confessions of ex communists who quit when they recognized its totalitarian beastliness, The God that Failed the title..."

Thomas, good catch. John Suiter said in his excellent Poets on the Peaks that The Buddhist Bible was the only book he took with him, so maybe that other book was already at the shack when Jack got there?

Of course, we know that Jack was fast and loose with facts when it came to his "fiction." So who knows for sure?