HERE COMES THE WAITING FOR THE SUN by Beat56: A review

Beat56 is a friend of mine on Twitter about whom I know very little -- it's limited to what he Tweets about. Anyway, he has been referencing a poetry book he has self-published (HERE COMES THE WAITING FOR THE SUN) and so I bought one the other day from Amazon (click HERE). It was ten bucks and change and I'm glad I acquired this little poetry collection. 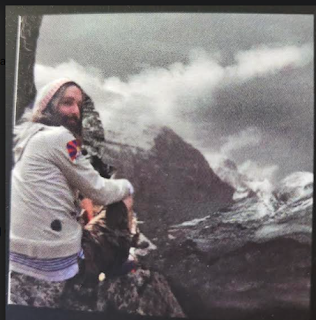 The back cover declares "Death drug Romantic poems" in large letters with a small picture of the author (above). Beat56's Twitter description is as follows:

That description gives some insight into this poetry. It is rambling and follows few conventions. Beat56's poems are full of imagery and done in free verse. Here is an example: 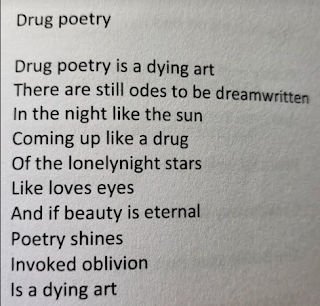 Throughout the collection, the author deals with topics such as drugs, poets (e.g., Gregory Corso and Jack Kerouac), musicians (e.g., Jim Morrison and Kurt Cobain), eastern topics (e.g., Buddhism and the Himalayas), movies (e.g., Star Wars and The Karate Kid), suicide, depression, and, of course, poetry -- which is fine despite being a tad meta.
Formatting is an issue -- it is sometimes hard to tell where one poem starts and another begins. Perhaps that was intentional. I felt trippy reading the poems straight-through, and maybe that was intentional, too.
Like I said, I'm glad I bought the book. It's probably not going to win a Pulitzer, but it is full of emotion and thoughtful imagery/references. It has a mystical quality to it that is rather inscrutable. On Twitter, Beat56 often bemoans the demise of poetry in this modern age. With this collection, he has done his part to make that complaint less salient.
P.S. Fittingly, I had a shot of whiskey -- my drug of choice -- before writing this review. I'll blame any typos on that.
Posted by Rick Dale, author of The Beat Handbook at 1:51 PM