Report from LCK!: Meeting someone who knew Jack

This is a short entry. You'll see why.

On the Saturday pub crawl during Lowell Celebrates Kerouac! 2008, we stopped by Major's, a bar that Jack Kerouac frequented. We learned that a man at the bar was a regular there, and actually hung out there at the same time as Jack!

I felt compelled to talk with him. His name is Phil. Here's a picture by Crystal: 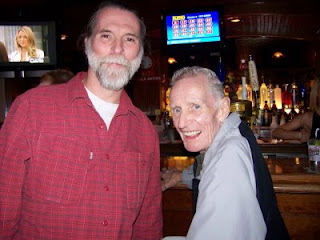 He told me that when he knew Jack, he wasn't aware that he was a famous writer. I asked him what he remembered most about him, and this is what he said:

"He was nice to the shoeshine boys."