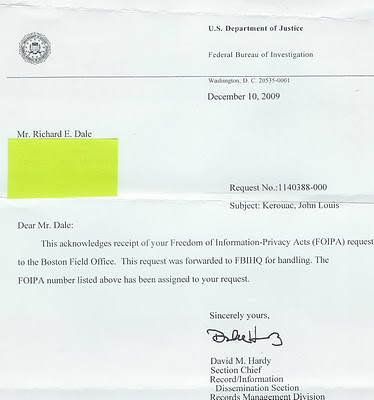 Here is Part 2 in the on-going saga regarding my attempts to determine if Jack Kerouac has an FBI file (and get copies if one exists) under the Freedom of Information Act. As you can see by the above letter, my request to the Boston field office (contacting multiple field offices was recommended at Get Grandpa's FBI Files) was forwarded to FBI Headquarters, which I had also contacted directly. The FBI has assigned the same FOIPA number to both my requests. Perhaps one letter to FBI Headquarters is sufficient in such matters.

As I described on Facebook, the other morning I stopped at the post office on my way to work. A big black SUV pulled in after me and parked behind me in a perpendicular fashion, blocking my exit unless I made a wide swing around it. It was still there when I exited the post office, and a bald man was sitting in the driver's seat apparently talking on the phone through an earpiece. I pulled around the SUV and headed for work. The SUV pulled out right after me and stayed within sight behind me the entire way - 20 miles. About a mile from my office, I turned off and it went straight.

I bet I have an FBI file now, but at least I know how to find out.

I'll keep you posted.
Posted by Rick Dale, author of The Beat Handbook at 6:38 PM