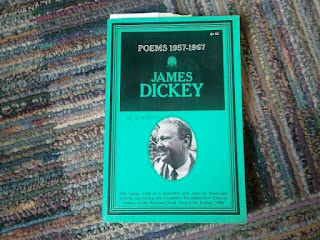 As a beat, it is necessary to visit the local used bookstore from time to time and search for anything by Jack Kerouac, Allen Ginsberg, William S. Burroughs, or other beat generation authors. I did that today and came up empty-handed. I'm not sure what that means, especially in a college town. However, I did score a James Dickey poetry book for 3 bucks. It contains "Falling," an amazing poem which I discovered a couple of years ago, as well as the complete Buckdancer's Choice, which won the National Book Award for Poetry in 1966. Jack Kerouac was still alive then. I wonder what he thought of Dickey. We know that Dickey thought of Jack enough to reference him at least a couple of times in his letters, captured in The One Voice of James Dickey: His Letters and Life, 1942-1969 (2003, The University of Missouri Press).

For example, in a 1958 letter to James Wright at the University of Minnesota, Dickey wrote, "This is truly, as I guess Jack Kerouac would say, a really mad life, and I don't know how long I can go on with it" (p. 288).

You may know Dickey as the author of the novel, Deliverance, which was made into the excellent movie of the same name featuring Burt Reynolds and Jon Voight. You may also know that Dickey himself had a small role in that film as the sheriff, who, at the end, tells Voight's character "Don't ever do nothing like this again." Menacing! I love it.

Anyway, you could do worse than read some of Dickey's poetry. Click here for a link to "Falling."
Posted by Rick Dale, author of The Beat Handbook at 2:56 PM