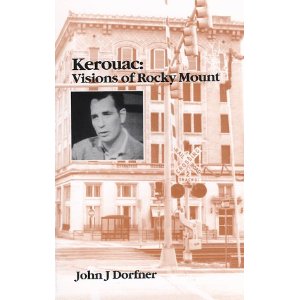 Last night I finished John J Dorfner's Kerouac: Visions of Rocky Mount, and, like his other book, Kerouac: Visions of Lowell, it kept me engaged from start to finish. It includes many pictures from actual places in and around that part of North Carolina where Jack lived and wrote some of his famous works. Dorfner took the time to search out and take pictures of specific houses, intersections, and even the kinds of trees that Jack mentioned in such novels as On The Road, The Dharma Bums and Visions of Cody. Reading it made me want to visit the area so I can see the places for myself. Dorfner's other book was especially fascinating for me because I've spent a bit of time in Lowell.

The introduction is a concise bio of Jack's early years and then his time in North Carolina. The numerous pictures are accompanied by Dorfner's musings as well as various Kerouac quotes referencing those particular places around Rocky Mount, NC, where Jack occasionally lived with his sister, Nin, her husband, Paul, and their baby son, Paul, Jr. It's the place Jack refers to as being in Testament, Virginia in On The Road, where he and his mom (Memere) were visiting when Neal (Dean), LuAnne (Marylou), and Al Hinkle (Ed Dunkel) showed up from out west in the '49 Hudson and used it to move furniture to New York City in a mad frenzy of driving and talking courtesy of the Holy Goof.

If you've ever wanted to see actual images of some of the places around Rocky Mount that Jack wrote about, this is an essential edition to your Kerouac collection. That it's a fun and informative read is icing on the cake.

Kerouac enthusiasts will want a copy, and the best way to do that is to contact the author at johnjdorfner@gmail.com. His website is http://www.johnjdorfner.com/.
Posted by Rick Dale, author of The Beat Handbook at 5:27 PM