Review: One and Only by Gerald Nicosia & Anne Marie Santos 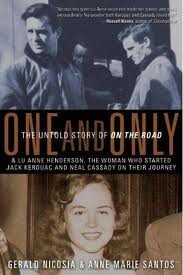 I just finished reading One and Only: The Untold Story of On The Road & Lu Anne Henderson, The Woman Who Started Jack Kerouac and Neal Cassady On Their Journey by Gerald Nicosia & Anne Marie Santos. Faithful readers of The Daily Beat (you know who you are, and thank you!) will recall that back on January 17 I posted about this book and said I'd review it if the publisher (or Nicosia) sent me a copy. The very next day, the publisher, Viva Editions, replied to my post that they would be happy to send me a review copy. Something even more interesting than that happened soon after, but I am saving that for its own post some other day in the near future. You will have to hold your breath on that one.

My first reaction when I took the book out of the mailing envelope was to notice the fantastic cover, featuring a classic picture of Jack and Neal (by our friend, Al Hinkle) and a headshot of Lu Anne courtesy of her daughter, Anne Marie (who co-authored the book). Indeed, Lu Anne was a beauty, and the book is replete with other photographs of the woman who inspired the Marylou character in On The Road.

The first four-and-a-half pages of the book feature reviews by various well-known authors such as Anne Waldman, founder of the Jack Kerouac School of Disembodied Poetics at Naropa University, several beat authors such as JoAnna McClure, and even Jack's nephew, Paul Blake, Jr. It's all high praise, and well-deserved. As this intimate look shows, Lu Anne was instrumental in the relationship between Kerouac and Cassady; without her, they may have never forged their deep friendship, never have gone "on the road" together, and Kerouac may have never written the book that launched the beat generation. That's saying something, but the authors make their case.

The book begins with an introduction by Nicosia titled, "The Necessary Estrogen." In it, Nicosia provides the back story behind his 1978 interview with Lu Anne, presented here for the first time. In 1978, Nicosia was traveling around the country doing interviews for his critically acclaimed (and rightfully so) Kerouac biography, Memory Babe, and "there was a lot going on in the Kerouac realm" (p. 17). Despite new Kerouac biographies surfacing and the filming of Carolyn Cassady's memoir, Heart Beat, the real-life Marylou (Lu Anne) was notably absent in all the "neo-Beat hullabaloo" (p. 18). This book rights that oversight, presenting Lu Anne as not a "cliched sex symbol or ditzy blonde," but as "keenly observant, sensitive, and thoughtful not just about the lives of herself and her friends, but repeatedly about the human condition as well" (p. 29).

Thanks to the efforts of Nicosia, and of course Lu Anne's daughter, Anne Marie, this book allows us to meet the real Marylou, and our future re-reads of On The Road will never be the same. I just finished reading On The Road: The Original Roll (I refuse to call it the Original Scroll, because, as Nicosia himself told me, that isn't what Jack called it and the term "Scroll" was created as a marketing ploy), and now I want to read the original version yet again because now I have such a clear picture in my mind of the Marylou character (who, admittedly, was not Jack's focus in the book and consequently not very fleshed out as a character).

The interview with Lu Anne itself, which Nicosia painstakingly transcribed from two lengthy sessions, is presented in six parts taking up 117 pages. It's a fascinating glimpse into the woman who played such a critical role in Kerouac's and Cassady's lives. Following the interview, there's a chapter titled, "Lu Anne's Role in Beat History/Cultural History," in which Nicosia points out the demeaning manner in which Lu Anne is portrayed in many Beat histories. Nicosia wonders why no one has ever pointed out, "She must have been quite a woman to get this interesting and fabled guy [Cassady] to keep coming back to her, all his life -- right up to the moment when he left for Mexico and the death he seems to have foreseen coming" (p. 170).

Following this chapter is "Al Hinkle's Story," which provides a number of important insights about Lu Anne from Neal Cassady's best friend (Big Ed Dunkel in On The Road), who was one of the crew that traveled with Kerouac, Cassady, and Lu Anne, and someone who stayed friends with Lu Anne right up to her death. Al's memories are priceless and this was an excellent choice to round out Lu Anne's story.

Next is an unsent letter from Lu Anne to Neal that Anne Marie found among her mother's papers. She thinks it was written in Tampa, Florida in 1957. An actual image of the letter is provided, along with a transcription. It's a real Beat treasure.

Finally, the book concludes with a chapter titled, "A Daughter's Recollection," by Anne Marie. Here we learn about Lu Anne's early life, her marriages, her "inborn understanding" of how wrong racism was (remember, the Beats were definitely going against the grain of society at the time in their embracing all humanity despite the color of one's skin or cultural background), Anne Marie's first encounter with Neal, typical mother-daughter experiences that had nothing to do with the Beat life, Lu Anne's later years, and Anne Marie's experience working on the upcoming Walter Salles' movie version of On The Road.

This is a fascinating book compiled by an excellent writer and acknowledged Beat expert. Nicosia's style is engaging, accessible, and conversational, yet he never shies away from details or controversial topics. This book deserves a place on any Beat scholar's shelf and should serve as an excellent source of information for future work on the subject. It also deserves a place on the shelf of any Kerouac or beat generation fan, as it presents, for the first time, the untold story of the amazing woman who, quite literally, catalyzed a cultural movement.

The book is available from the publisher, Viva Editions. I highly recommend it.

Posted by Rick Dale, author of The Beat Handbook at 3:41 PM

I really liked Carolyn Cassady's book, Off the Road, and this review makes me really want to read about Lu Anne.

Nicosia is indeed "The Man" when it comes to Kerouac scholarship --- and I really believe that Douglas Brinkley backed away from his attempts at a Kerouac bio because he realized he had nothing much (if any) to add to Nicosia's work. (Which is a Good Thing for all of us.)

We agree. I don't know what Brinkley would add, but I also wonder if he got mired in the estate mess and had trouble accessing archives.