NY Times review of On the Road 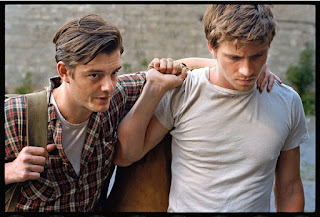 Now that the U.S. version of On the Road has hit theaters (at least in two cities), we can expect more reviews. My prediction is that they will be mixed (as were the ones for the Cannes version), as is this one from the NY Times.

Here's the concluding paragraph in case you need a teaser to go read the review:

In the cameo roles of the mistreated women in Dean’s life, Kristen Stewart smolders with sullen, defiant sensuality as she tries to keep up with the boys, and Kirsten Dunst reacts to Dean’s betrayals with outraged indignation. Because these female impediments to Dean’s selfish pleasure-seeking are far more real on the screen than in the book, his romantic mystique is fatally tarnished in the movie. It all seems — dare I say it? — of little consequence.

Posted by Rick Dale, author of The Beat Handbook at 4:12 PM