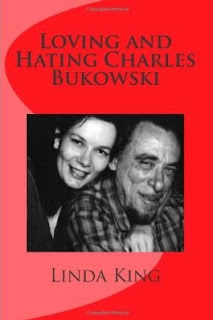 A few weeks ago, Gerry Nicosia suggested I get in touch with Linda King regarding her recent book, Loving and Hating Charles Bukowski. Gerry knew Bukowski and knows that I'm a fan of his work, so there's a Kerouac connection. Although about the same age, Bukowski isn't considered one of the Beat writers; however, one can imagine his style appealing to Beat fans and in some ways he certainly lived a Beat lifestyle.

I contacted Linda by e-mail and we agree to exchange books. My journey through her fascinating memoir began with her intriguing inscription: 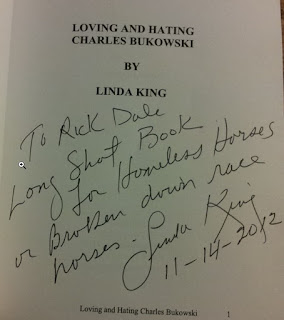 Linda first saw Bukowski at The Bridge, "a small bookstore poetry-hole off Hollywood Boulevard in Los Angeles." While browsing the books waiting to hear Bonnie White in performance, Linda asked the owner, "'Who is the best poet in Los Angeles?'" The owner named Bukowski and handed Linda a book of his poetry which she opened to the line, "God tongues out your asshole." She asked if Bukowski were a homosexual and the owner told her to look out the window, where Bukowski and friend Neeli Cherry were wrestling in the parking lot. When Neeli came in the store, the owner said, "'Is Charles Bukowski a homosexual? This lady would like to know.'" Cherry was momentarily speechless and then said, "'He doesn't suck my cock.'"

Linda quickly ducked into the performance room before Bukowski came in the store, and such was her first encounter with the man who later became her long-time lover. She next saw Bukowski reading at The Bridge on July 2, 1970. Recently divorced and celebrating her liberation, she attended the reading on her way out of LA for an annual family get-together in Boulder for the 4th of July.

After the reading, Linda went up to Bukowski and said, "'You don't seem to like women too much.'"

Linda left, thinking that would be the last time she saw Bukowski. On the contrary, she ran into Bukowski again a few weeks later, and ended up agreeing to sculpt a bust of his head. Through that process - which Linda describes in detail as she does many facets of their relationship throughout the book - she was seduced by his "letters, writing, and wit," and began an intense, on-again-off-again love affair that lasted until the mid-70s.

Loving... is an intimate memoir focused around Linda's love affair with Bukowski.  To be able to put forth the level of detail in the book, she either journaled extensively through that time period or has an incredible memory (or both). The opening story above is just one example.

A real plus in this book is the extensive, verbatim entries from Bukowski's letters to Linda, often spurred by their frequent break-ups.

Dear Linda,
I am sitting here with his [sic] hole in my guts today.
I can't even look at your photo. I have to hide it.
I was going to drive over .
Then I thought, better not, better not.
It rains. It won't rain. It's dark. Jesus Christ.
love,
Bukowski

Several of Bukowski's (she called him Bukowski) poems appear in the memoir in addition to letters like the above. Speaking of photos, there are a few sprinkled throughout the text. The one of Linda on p. 7 proves she was quite a looker (30-something to Bukowski's 50-something). On p. 40 is a picture of Bukowski posing next to her bust of his head, and it is a fantastic likeness.

You'll notice the error in the letter above (I doubt it was Bukowski's), and that is my one complaint about the book: it has an inordinate number of typos. They don't get in the way of comprehension, though, and I found myself engaged throughout. One of my yardsticks for the value of a book is how quickly I read it. If I'm not engaged, it can take me weeks to slog through a book. I read Linda's in about a week. For me, that is record time at this stage of my life.

One thing puzzled me all the way through the book, and that was why a woman would stay with a man who mistreated her so (cheating on her, raging at her for no reason, etc.). It's an age-old story, though, and there's never a simple answer. Linda's memoir gives us as good an answer as we're likely to get regarding such situations, and in part it involves intense feelings that offset the accompanying low points.

Loving... includes many of Linda's poems, including one she confesses is a shocker, "A Cock," which she read at the Santa Cruz Poetry Festival on November 25, 1974 (which also featured Bukowski, Allen Ginsberg, Ferlinghetti, Gary Snyder, Jerry Kamstra, and others). An excerpt:

what is it?
it goes up, it goes down
what's that?
there's nothing that important
about going up and down
and in and out

If you're prudish about graphic sexual references, you may find Loving... a bit over the top. I did not. I found it honest and insightful, and I enjoyed it immensely. How could one possibly be intimate with Charles Bukowski for years and write a memoir about him that isn't graphic? It just wouldn't do.

Linda has been a sculptor for over 50 years and has done many sculptures of noted writers and poets, including Lawrence Ferlinghetti and Jack Micheline. She's also a widely published poet and continues to write, paint, and sculpt in San Francisco where she lives near her grandchildren.

If you're a Charles Bukowski fan, or just a fan of interesting memoirs related to well-known people, check out Loving and Hating Charles Bukowski.
Posted by Rick Dale, author of The Beat Handbook at 4:34 PM

Describe the man and the era so well. Great job Linda.