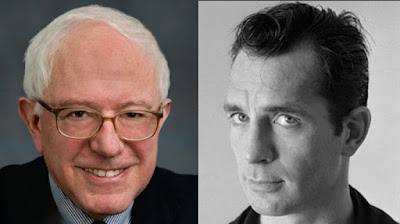 Texas Republican Congressperson Louie Gohmert (no relation to Private Pyle, despite the obvious connection), recently opined that the reason Bernie Sanders is doing so well is


because we let some of the hippies from the ‘60s who created such chaos then start teaching the teachers, and teaching them how great socialism is and just rewriting history and keeping them from realizing socialism has never worked, it will never work in this world, in this life, because if you’re going to pay everybody the same thing then they’re going to quit working.

Now, here is my reasoning for saying that Bernie Sanders' success is Jack Kerouac's fault.

1. Jack Kerouac was the Father of the Beat Generation. This is axiomatic.
2. The Beat Generation influenced the hippie movement. This is likewise axiomatic.
3. The hippies paved the way for a socialist like Sanders to succeed. This has to be true because a U.S. Congressperson from Texas said so.

There you have it. A tight syllogistic explanation of why Jack Kerouac is responsible for Bernie Sanders' success.

You go, Jack!
Posted by Rick Dale, author of The Beat Handbook at 8:58 AM

Entirely unrelated--I refer to my ex-husband as "Gomer."