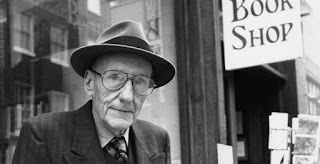 Burroughs' birth date was one day after Neal Cassady died in 1968.

So Happy Birthday, Old Bull. Here's a passage about you from On the Road that's instructively descriptive, albeit "fictional":


It would take all night to tell about Old Bull Lee; let's just say now, he was a teacher, and it may be said that he had every right to teach because he spent all his time learning; and the things he learned were what he considered to be and called "the facts of life," which he learned not only out of necessity but because he wanted to. He dragged his long, thin body around the entire United States and most of Europe and North Africa in his time, only to see what was going on; he married a White Russian countess in Yugoslavia to get her away from the Nazis in the thirties; there are pictures of him with the international cocaine set of the thirties-gangs with wild hair, leaning on one another; there are other pictures of him in a Panama hat, surveying the streets of Algiers; he never saw the White Russian countess again. He was an exterminator in Chicago, a bartender in New York, a summons-server in Newark. In Paris he sat at cafe tables, watching the sullen French faces go by. In Athens he looked up from his ouzo at what he called the ugliest people in the world. In Istanbul he threaded his way through crowds of opium addicts and rug-sellers, looking for the facts. In English hotels he read Spengler and the Marquis de Sade. In Chicago he planned to hold up a Turkish bath, hesitated just for two minutes too long for a drink, and wound up with two dollars and had to make a run for it. He did all these things merely for the experience. Now the final study was the drug habit. He was now in New Orleans, slipping along the streets with shady characters and haunting connection bars.

There is a strange story about his college days that illustrates something else about him: he had friends for cocktails in his well-appointed rooms one afternoon when suddenly his pet ferret rushed out and bit an elegant teacup queer on the ankle and everybody hightailed it out the door, screaming. Old Bull leaped up and grabbed his shotgun and said, "He smells that old rat again," and shot a hole in the wall big enough for fifty rats. On the wall hung a picture of an ugly old Cape Cod house. His friends said, "Why do you have that ugly thing hanging there?" and Bull said, "I like it because it's ugly." All his life was in that line. Once I knocked on his door in the 60th Street slums of New York and he opened it wearing a derby hat, a vest with nothing underneath, and long striped sharpster pants; in his hands he had a cookpot, birdseed in the pot, and was trying to mash the seed to roll in cigarettes. He also experimented in boiling codeine cough syrup down to a black mash - that didn't work too well. He spent long hours with Shakespeare - the "Immortal Bard," he called him - on his lap. In New Orleans he had begun to spend long hours with the Mayan Codices on his lap, and, although he went on talking, the book lay open all the time. I said once, "What's going to happen to us when we die?" and he said, "When you die you're just dead, that's all." He had a set of chains in his room that he said he used with his psychoanalyst; they were experimenting with narcoanalysis and found that Old Bull had seven separate personalities, each growing worse and worse on the way down, till finally he was a raving idiot and had to be restrained with chains. The top personality was an English lord, the bottom the idiot. Halfway he was an old Negro who stood in line, waiting with everyone else, and said, "Some's bastards, some's ain't, that's the score."

Bull had a sentimental streak about the old days m America, especially 1910, when you could get morphine in a drugstore without prescription and Chinese smoked opium in their evening windows and the country was wild and brawling and free, with abundance and any kind of freedom for everyone. His chief hate was Washington bureaucracy; second to that, liberals; then cops. He spent all his time talking and teaching others. Jane sat at his feet; so did I; so did Dean; and so had Carlo Marx. We'd all learned from him. He was a gray, nondescript-looking fellow you wouldn't notice on the street, unless you looked closer and saw his mad, bony skull with its strange youthfulness--a Kansas minister with exotic, phenomenal fires and mysteries. He had studied medicine in Vienna; had studied anthropology, read everything; and now he was settling to his life's work, which was the study of things them-selves.-in the streets of life and the night. He sat in his chair; Jane brought drinks, martinis. The shades by his chair were always drawn, day and night; it was his corner of the house. On his lap were the Mayan Codices and an air gun which he occasionally raised to pop benzedrine tubes across the room. I kept rushing around, putting up new ones. We all took shots and meanwhile we talked. Bull was curious to know the reason for this trip. He peered at us and snuffed down his nose, thfump, like a sound in a dry tank. (Penguin Books, 1976, pp. 143-144)


Posted by Rick Dale, author of The Beat Handbook at 2:28 PM