Jack Kerouac and the Tao of fried eggs 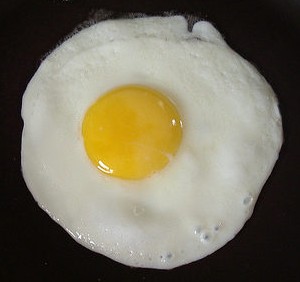 I was eating fried eggs for breakfast Saturday morning and I caught myself thinking about how much I liked the yolk. Next thought (a question): Why couldn't an egg be all yolk -- wouldn't that be perfect?

Answer: Of course not. It's a yin/yang thing. No good without evil, no light without dark. No love without hate. No yolk without the white.

Which brought me to Kerouac -- as Kerouac seems to be my religion -- and speaking of religion and Kerouac I decided to page through Some of the Dharma (Penguin, 1997), a book one does not simply sit down and read straight through (at least I don't, or can't). Quite a few passages jumped out at me in my skimming and I thought I'd share them.


I don't want to be a drunken hero of the generation suffering everywhere
with everyone---
I want to be a quiet saint living in a shack in solitary meditation
of universal mind---  (p. 63)

What Jack aspired to and what he did were in conflict, but weren't they just the yolk and the white -- party-mad boozehound and ascetic religious hermit -- in one  person?

Not a bad credo and of late we could certainly use number 3, at least in America.

Speaking of America, this passage resonated:

If, as Burroughs insists, "Buddhism is not for the West," then I get a great vision of the whole Western World filled with the ignorant and simple-minded (p. 101).

I'll let that speak for itself in light of recent events here. Later on, Jack says, "BOYCOTT IGNORANCE." Twice (on p. 166).

B     Baby crying because it doesn't want to be born =

Speaking of death, on p. 257, out of the blue, Kerouac says, "Walkin in Jerusalem, just like John...". I assume he was thinking about the old spiritual (which I know from the bluegrass genre), but, specifically, was he thinking about John's exhortation to be ready for judgment day when the New Jerusalem comes down from above (foreseen by John in Revelations)? Or was Jack thinking about where Jesus walked on his final day, and of the Stations of the Cross in Lowell that he prominently featured in some of his writing? In any case, it's an odd bit to appear suddenly within the context of Buddhist teachings unless one understands the yolk of Catholicism and the white of Buddhism that made up Jack's spiritual essence.

Like the yolk and the white, there's life and there's death. Hope and fear. Knowledge and ignorance. Kindness and it's opposite, whatever that word may be.

We get to choose what we focus on. Do we focus on the negative or on the positive? This is a bitter pill for me to swallow right now as I am admittedly seeing the glass half full. What I particularly need to do is make sure I don't drift toward depression and end up with the black dog following me around again.

Toward that end, I will seek refuge in loved ones, friends, and things that make me smile like cats and beer and books and music and I will seek to limit my exposure to the dark stuff. Limit, not exorcise completely as there is work to do and one must be informed in order to do it.

Love is all! Whoever said that must have been a pretty smart person.

You. Happy Sunday to you.

Posted by Rick Dale, author of The Beat Handbook at 7:34 AM