As The Daily Beat readers know, an epic Kerouac event occurred at the end of July in 1982. Held in Boulder, Colorado, "On the Road: The Jack Kerouac Conference" took place at the University of Colorado's Boulder campus and was sponsored by The Naropa Institute. The conference, in celebration of the 25-year anniversary of the publication of On the Road, featured almost every living Beat celebrity/scholar and Kerouac-related person of note (as evidenced by the posters below).* 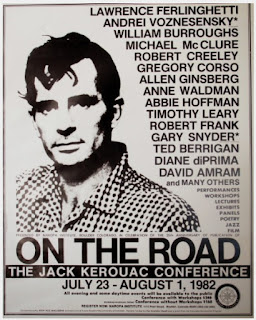 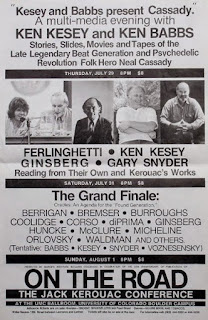 But you knew all that. However, you may not have seen the following picture from the conference. It was recently sent to me by attendee Gerry Nicosia, author of Memory Babe: A Critical Biography of Jack Kerouac (he's in the front row with legs crossed, two over from Burroughs).

Gerry provided the following key to the photo. If you can fill in any blanks, let us know.

Gerry plans on writing up his memories of the conference for a future post here at The Daily Beat. We can't wait.

*Attendee Brian Hassett even wrote a book about the event titled, The Hitchhiker's Guide to Jack Kerouac (available at Amazon).


Posted by Rick Dale, author of The Beat Handbook at 8:37 AM

Thanks so much for posting the pic from the event...choice! #LongLiveJack&Neal

I was there. I remember William Burroughs was staying in the same dorm, on the same hallway that I was. I held the door for him a couple of times as we passed. Walking by his room late at night, one heard the sound of a typewriter. I believe he was writing The Place of Dead Roads. Around the end of the conference, the Grateful Dead played at Red Rocks. A bunch of us dropped acid and went. I am not a fan of the Dead, but to be there with Kesey, Babbs, Ginsburg, et al felt like a can't-miss opportunity. The whole thing was pretty unforgettable.