Albert Saijo's The Backpacker and a story 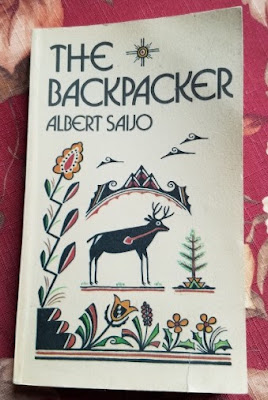 Faithful readers of The Daily Beat need no introduction to Albert Saijo, but in case you are dropping by and new to Jack Kerouac, here is a little bit of information.

Albert Fairchild Saijo was born in Los Angeles, the son of a Christian preacher and a Japanese schoolteacher and writer. Studied Zen Buddhism in LA in the late 1940s and in the 1950s moved to the Bay Area, where he met and befriended Jack Kerouac and other Beat poets in San Francisco’s Chinatown. A cross-country drive in 1959 with Kerouac and Lew Welch resulted in a book of “road-trip haiku” called Trip Trap (1973) to which all three contributed. Spent his final years in Hawaii. (Source: Character Key to Kerouac's Duluoz Legend, http://www.beatbookcovers.com/kercomp/)

Saijo came to mind a few weeks ago when we were discussing Kerouac's novel, Big Sur, in my Kerouac class at the University of Maine at Farmington. Saijo appears briefly in that novel as George Baso. I had not previously thought about what Saijo may have published besides Trip Trap, and a little searching on Amazon revealed a book titled, The Backpacker. So, on a whim, I ordered it (used was the only option).

Imagine my surprise when the book arrived with a most wonderful note from the seller, Tammy (daughter-in-law of the previous owner). I hope you can enlarge the below photos and read it in its entirety. 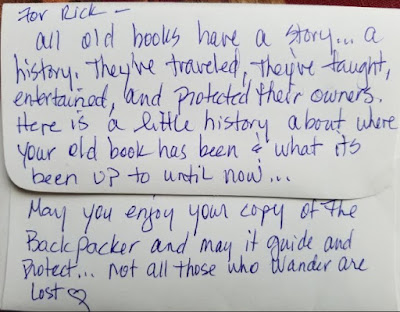 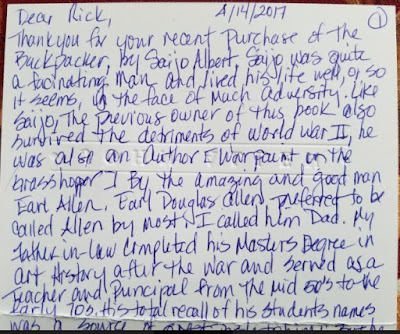 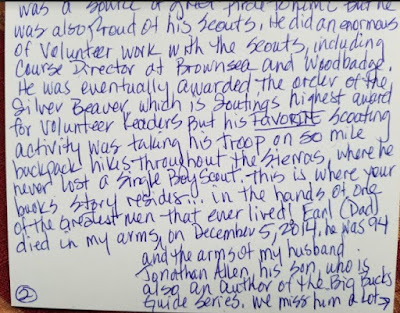 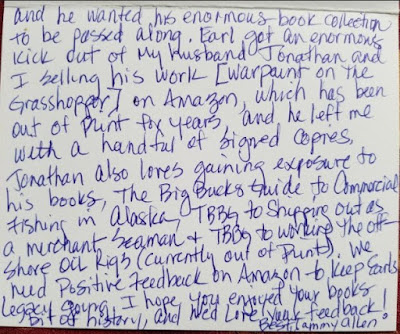 As a fan of synchronicity, I point out the following:

-The note on the outside of the envelope ended with "not all those who wander are lost." I own a T-          shirt with that saying on the front (I am not a big Tolkien fan, but love the sentiment)
-The former owner, Earl Douglas Allen, was a teacher, as was I (retiring officially in 3 days)
-Allen, as he liked to be called, loved to hike, as do I.
-Allen was an author, as am I.
-Allen's son, Jonathan, is an author who wrote about shipping out as a merchant seaman, something        our Jack could relate to.

If you are interested in either Allen's or Jonathan's writing, check them out on Amazon.

Warpaint on the Grasshopper by Earl Douglas Allen

The Big Bucks Guide to Shipping Out as a Merchant Seaman by Jonathan Allen (NOTE: Jonathan has other titles as well).

Tammy, I am going to send along a note in the mail and hope you can access this blog post. Thank you for sharing your Dad's story with me. It makes my copy of The Backpacker that much more special. You have given my eventual heirs a fantastic idea for dispersing my book collection!

Posted by Rick Dale, author of The Beat Handbook at 12:38 PM

Love the story, I bet you'll think about him every time you pick it up. RM

Great story. For more Saijo, you can read his poetry. Look here: http://www.spdbooks.org/AdvancedSearch/DefaultWFilter.aspx?SearchTerm=Saijo

I'm the publisher of WOODRAT FLAT, and knew him a bit in Volcano. Lovely man.