Kerouacian gift from a student 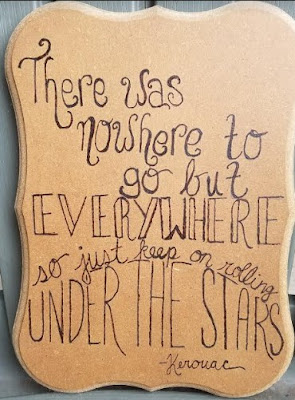 One of my students made this woodburning for me as a retirement gift. It's from Part 1, Chapter 4 of On The Road.

What an excellent and thoughtful gift, right? I love that she made it herself!

Purists will note a small discrepancy from the text, but that is understandable. I suspect my student may have gotten the quote from Goodreads, which cites the original scroll.

Here is the Goodreads quote:
“There was nowhere to go but everywhere, so just keep on rolling under the stars.”

Here is the original scroll's version:
"...because there's nowhere to go but everywhere, and keep rolling under the stars, generally the western stars."

Here is the classic text's version:
"...because there was nowhere to go but everywhere, keep rolling under the stars, generally the Western stars."

As you can see, there are several differences between the original scroll and the classic version, and the Goodreads entry is not exactly the same as either (bad on Goodreads). Somewhere along the line, someone took this great line and changed it just a little bit and it got repeated by others.

My student gets a pass on this. First of all, it's the thought that counts. Second, it's pretty damn close to the actual quote. Third, when I Google the quote, the top 6 entries are wrong. Fourth, she's one of my majors and not from my Kerouac class. Fifth, even though she wasn't in my Kerouac class, she still knew about my Kerouac obsession. Sixth, even if you wanted to fact-check Goodreads, it's pretty difficult to find passages in the original scroll unless you really know the book (given that there are no chapters and no paragraph breaks, and Goodreads provides no page number).

Lesson to readers: There are lots of misquoted or misattributed "Kerouac quotes" out there. Be careful. One good resource is the Kerouac Wikiquote (but even that is no help in the above instance -- perhaps someone will edit the Wiki to address that): https://en.wikiquote.org/wiki/Jack_Kerouac.

To my student (if you read this): Sorry to make a lesson out of your gift, but I know the Kerouac community and someone was bound to point this out. Better me than them.

Posted by Rick Dale, author of The Beat Handbook at 7:43 AM