Curation #14 from my Kerouac bookshelf: On The Road (the film) 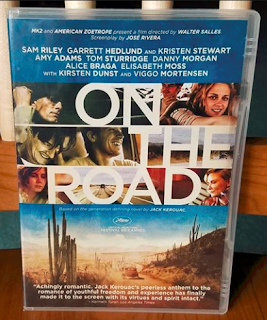 Item #14 in my Kerouac curation project is a DVD of the 2012 film of On The Road directed by Walter Salles (The Motorcycle Diaries). It has a run time of 124 minutes. It received worse viewer ratings on IMDB and Rotten Tomatoes than Howl (6.1/10 and 2/5), and saw mediocre critical reviews. I've watched this film over a half dozen times, and it grows on me each time. I've reviewed it before (after watching it only twice) here: http://thedailybeatblog.blogspot.com/2013/04/review-of-walter-salles-movie.html. Today's thoughts may differ.

Some say Kerouac's seminal Beat novel is "unfilmable." Well, Jack himself didn't think so, at one time writing to Marlon Brando and asking him to buy On The Road and make a movie of it starring Brando as Dean and Kerouac as Sal. Granted, it's a tall order to capture Kerouac's genius in a different medium, but Salles does a serviceable job.

At first I questioned the casting, but with repeated viewings I have come to appreciate Sam Riley's low-key approach to Sal (Kerouac). Hedlund is miscast; although quite a watchable actor, he doesn't portray Dean's (Neal Cassady's) kinetic characteristics and seems too brooding. I don't love Kristen Stewart in general, and she is barely adequate as Marylou (LuAnne Henderson, who Kerouac describes as a pretty blonde and Stewart was definitely not blonde in the film). Other portrayals I thought were very good were Jane (Amy Adams as Old Bull Lee's -- William S. Burroughs' -- wife), Tom Sturridge as Carlo Marx (Allen Ginsberg), Danny Morgan as Big Ed Dunkel (Al Hinkle), Elisabeth Moss as Galatea Dunkel (Helen Hinkle), Alice Braga as Terry (Bea Franco), and Kirsten Dunst as Camille (Carolyn Cassady). Viggo Mortensen was outstanding (as always) as Burroughs, but was not on screen enough. Steve Buscemi is always great, and he portrays the tall, thin fag that Dean hustles (in an unnecessarily graphic scene).

I could nitpick about what was missing. For example, there was nothing about Sal's time with Remi Boncoeur (Henri Cru) out in California, and overall the film could have used more voice-overs of Kerouac's own words. Likewise, the spiritual aspects of the novel (according to Kerouac, "...really a story about two Catholic buddies roaming the country in search of God. And we found Him.") were underplayed compared to the sex, drugs, and jazz scenes. I was looking for more emphasis on "IT." The travel scenes came through via wonderful cinematography. The pacing of the movie was a good match for the pacing of the novel -- 100 MPH the whole way and not lingering too long in one place.

I think On The Road is a good film. It's not perfect, but it's not the heinous monstrosity some Kerouac fans claim. Salles produced an eminently watchable film that I would think would appeal to anyone who appreciates the novel and understands the challenges of bringing it -- or any novel -- to the big screen.

Below is a picture of the top shelf of my Kerouac bookshelf showing the placement of my On The Road DVD (10th item in the pile) on the day I started curating my collection. Next up: Life Lines, a poetry book by Charles James.


Posted by Rick Dale, author of The Beat Handbook at 10:50 AM