Curation #16 from my Kerouac bookshelf: The Last Time I Committee Suicide (DVD) 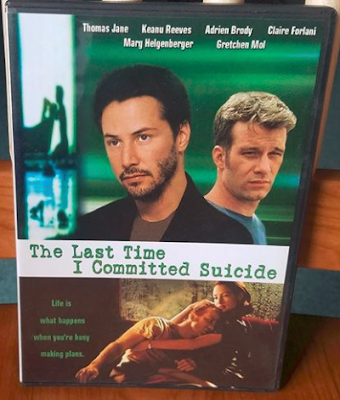 Item #16 in my Kerouac bookshelf creation project is a DVD of a 1997 film titled, The Last Time I Committed Suicide. It was directed by Stephen Kay and has a run time of 94 minutes.

Sadly, I have no memory of watching this film, yet it stars some actors I really like a lot (Thomas Jane, Keanu Reeves, Claire Forlani, Gretchen Mol, Marg Helgenberger, Adrian Brody). I think I tried to watch it once, fell asleep early on, and never tried watching it again. It's supposedly about 20-year-old Neal Cassady and based on his famous Joan Anderson letter to Jack Kerouac. Here's a link to a trailer: https://www.youtube.com/watch?v=YZC5u2IQ0Wk.

If you've seen the film, let us know what you think in a comment.

Maybe I'll give it a second chance.


Below is a picture of the top shelf of my Kerouac bookshelf showing the placement of this DVD (12th item in the pile) on the day I started curating my collection. Next up: Jack Kerouac Reads On The Road (CD).


Posted by Rick Dale, author of The Beat Handbook at 10:19 AM