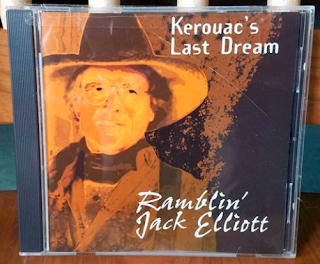 The 18th item in my Kerouac bookshelf curation project is this 1997 Appleseed CD by folk music legend Ramblin' Jack Elliott titled, Kerouac's Last Dream. This is the 70 minute re-issued version of a 1981 release recorded in Germany in 1980. It features the following songs:

As far as I know, Jack is still alive and performing, most recently with Peter Rowan (I'd pay to see that!). Here's a link to his website: http://www.ramblinjack.com/. We saw him at Sweetwater Music Hall in Mill Valley, CA, in 2013 as part of a beat poetry reading honoring Jack Kerouac. You can read about that event here: http://thedailybeatblog.blogspot.com/2013/01/san-francisco-kerouactivities-report.html. I'll never forget how Ramblin' Jack went on a tirade during his performance about no picture-taking during the show but he'd be glad to pose naked on a horse afterwards for pictures. Ramblin' Jack hung out with Kerouac in the early days, and says he had occasion to read On The Road long before it was published.

The provenance of this CD is sketchy, as I have a memory of it being a gift from someone in the Kerouac world who I've never met in person, but I have forgotten more of the story than that little tidbit. My apologies, but my memory is failing me these days and I don't write things down like I should (or remember where to find where I wrote them if I do remember to write them down). Anyway, I appreciate it and would be glad to get a reminder of who sent it to me. I don't think it was my friend, Richard, but I could be wrong about that.

This recording is still available and I put a link to it on Amazon below. It's worth having if you like music in general or folk in particular. Or just want to hear music by someone who was influenced by Woody Guthrie and had a big influence on a young musician you may have heard of: Bob Dylan. Speaking of which, here's a bonus: a bluegrass version of Dylan's "Don't Think Twice" featuring yours truly on banjo: https://www.youtube.com/watch?v=d9XPrBD38KQ.

Below is a picture of the top shelf of my Kerouac bookshelf showing the placement of this CD (14th item in the pile) on the day I started curating my collection. Next up: "Kerouac: kicks joy darkness (CD). Take heart: it's the last item in that pile and then it's on to books and such.

Posted by Rick Dale, author of The Beat Handbook at 9:41 AM