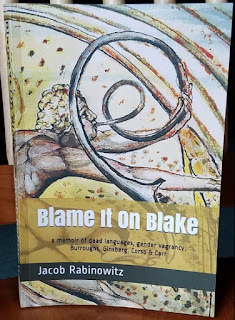 I wasn’t sure what to expect when I began reading Jacob Rabinowitz’s Blame It On Blake: a memoir of dead languages, gender vagrancy, Burroughs, Ginsberg, Corso & Carr, but the title helped me anticipate what was to come. This is a memoir by 60-year old Rabinowitz about his “Quixotic-like determination to close the gap between lived life and literature” (p. 238). As the author states:

It all came down to poetry. As a teenager, I had tried to make poetry the ordering principle of my existence. Following Rimbaud’s example, I got myself into a lot of drunken trouble, which I snapped out of with the help of AA. Then I cleared my intellectual decks with a good dose of Nietzschean modernism. This world view intoxicated me by its austerity and truth, for which I found echoes in the Bhagavad Gita. (p. 283)

If the academic tone of the above passage scares you, hold on tight because Rabinowitz routinely uses literary and philosophic references throughout the memoir. Many of them -- to me -- were obscure, but then I am not trained in the classics as is the author. For example:

I was curious about them [girls], but my few attempts to join in their conversations had met with the same success as Alberich encountered when he attempted to get friendly with the Rhinemaidens. (p. 21)

If reading about alcoholism from a personal perspective is triggering for you, be warned: it is a strong theme throughout Rabinowitz’s memoir. I found this statement by Ginsberg about Rabinowitz’s sobriety to be telling:

“You didn’t get over your addiction. You just replaced alcohol with ideas as a way of staying drunk all the time.” (p. 182)

Rabinowitz felt he was too smart for his school teachers, and took to reading what he wanted to read during class, an example of the autodidacticity that has followed him throughout life. He started hitchhiking into New York City as a teenager, in particular Greenwich Village, which is where he met and befriended the likes of Allen Ginsberg and William S. Burroughs and Lucien Carr and Gregory Corso. He came on the scene too late to meet Jack Kerouac, and only mentions him briefly.

This was autumn of 1976 and when the two met they proceeded immediately to indecencies, yet their sexual relationship is not the focus of the dynamic between the two, but rather an intellectual one focused around poetry. Rabinowitz is able to provide deep insights into Ginsberg.

He [Alan] was really a political figure. This made it trying to walk with him even the three blocks from his apartment to the nearby Polish pirogi palace. He was readily recognized , and never sidestepped a conversation with anyone eager for a little taste of the greatness. This is perhaps a part of the mystery of why he essentially lived his life alone. No one with enough personality and intelligence to truly engage Allen’s giant mind and great heart would have been content with the scraps of attention left at the end of the day -- particularly when the day didn’t end till late at night when the last letter was answered. (p. 54)

Rabinowitz points out that Ginsberg’s “mini-epic” Contest of Bards is an account of their entire affair.


As the title suggests, Rabinowitz experienced no small amount of gender identity confusion. In part convinced by Burrough’s The Naked Lunch that his drug use and homosexuality were legitimate, “being queer was the identity that seemed the best fit” (p. 29). The author lived a gay lifestyle and yet in later years settled down with the love of his life, Meryl, who suggested he undertake this memoir effort.


Rabinowitz had the most to say about his relationship with Ginsberg, but he has interesting insights to share about Burroughs, Corso, and Carr as well.


For example, we learn when they met that Burroughs’ Prince Street apartment was lined with cases of vodka he had taken instead of cash for some lecture or writing project, and he worked his way though it in a little over a year. We learn that Carr liked to order a triple vodka “‘with a splash of coke. Not too much coke,’ he would add, ‘I don’t want to ruin my stomach.’” (p. 85). We learn about the trickster theatre that was Corso’s ambience (p. 195), and we get an analysis of Corso’s final manuscript, which needed

a lot of editing, but it’s a remarkable document for exactly that reason. Gregory’s poetic gifts always had to swim upstream against the tide of his intoxication. (p. 337)

Which reminds me that I must add a quibble about this book. There are typos galore. Nothing that obscures comprehension, just minor distractions like Ginsberg’s name being misspelled “Gunsberg” on the thank you page (p. 4) and other misspelled words (“oportunity” on p. 182) or puzzlements like “I suggested that Mike to put an independent publishing centerfold . . . “ (p. 256). There is no publisher mentioned, and I suspect the book is self-published, meaning there may have been no editor other than the author himself -- always a dangerous practice.


One other quibble is that I would love to have this book indexed. It’s so academically dense that it could serve as a quasi-reference book on poetry, the classics, philosophy, philology, and religion. Within a few pages one is likely to encounter Dante, Milton, Blake, Melville, Chaucer, Lovecraft, and the list goes on. Rabinowitz had read and internalized an amazing amount of information, and he is not shy about framing his memoir accordingly. To some it may come across elitist -- to me it came across as a supremely intelligent and well-read person trying to explain a lived experience that was significantly influenced by the great thinkers.


There’s a lot here, and I’ve only scratched the surface of content. Rabinowitz is a strong writer -- typos notwithstanding -- and he frequently offers poignant, articulate, eloquent insights into matters of the mind or heart or both. We learn details about several important people in his life beyond Beat figures. He is obviously opinionated, but I expect no less in a memoir. Rabinowitz rails about New England in a section titled “Yankeedom,” concluding:

If I may paraphrase the Mikado, “the nourishment fit the crime.” Thus was visited upon the table such horrors as the “New England Boiled Dinner.”


The author concludes his memoir with this insight:

Now, after a lifetime seeking holy wisdom from books and from life, having succeeded in stealing a few glimpses of the infinitely secret, I comprehend better the terror--and the humor, of God . . . . And I am grateful to all the astonishing people who filled my life . . . and most of all I am indebted to one, whom I gladly make this memoir’s final invocation. You, who living I so rarely allowed the last word, you’ll be the last word here, dear Allen.

The book doesn’t have any information about the author so I asked him for a blurb and below is what he sent me. It’s wonderful and a fitting way to end this review of a book you should definitely check out (click here).

Jacob Rabinowitz was a changeling child left on a random doorstep in Paterson NJ. He acquired a PhD in Classics which rendered him virtually unemployable and for some time not very good company. He then spent several happy years teaching everything from Latin to Calculus up and down the eastern seaboard. He misses dirty, filthy 1970's New York, and has returned to New Jersey where he lives with his partner in crime, the artist Meryl Gross, no children, and a lawn full of bamboo.Since he is now a grown-up, he does not have to eat vegetables and has ice cream for dinner every night of the week.

Excellent. I think you'll dig it and Jacob will be pleased the review created a sale....Rick