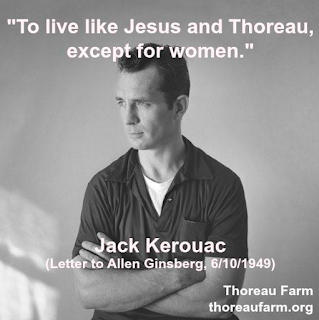 On this day -- May 6 -- in 1862, American essayist, poet, philosopher, abolitionist, naturalist, tax resister and all-around Renaissance man Henry David Thoreau died at age 44 in Concord, MA. There's more to the Jack Kerouac-Thoreau connection than that they were both born in Massachusetts.


Kerouac was a fan of Thoreau and drew inspiration from his work - in Kerouac's copy of "A Week on the Concord and Merrimack Rivers," the line "The traveler must be born again on the road" is underlined and a check mark placed next to it.


This post also mentions a Kerouac quote from a June 10, 1949 letter to Allen Ginsberg (see above):


To live like Jesus and Thoreau, except for women.

Not only might Jack have gotten the idea for the name of his most famous novel from Thoreau, but he also may have been influenced to take his solo adventure on Desolation Peak:


And yet he never felt more desolate about having to leave Lowell. At the last minute he wanted to give up his scholarship to Columbia. He even talked about living in the woods like Thoreau, until his parents set him straight about the value of a college education. (Gerald Nicosia, Memory Babe: A Critical Biography of Jack Kerouac, 1994, University of California Press, p. 75)

Indeed, Thoreau is mentioned in the index as appearing on 11 different pages in Memory Babe.  In Ann Charters' two volumes of Jack Kerouac: Selected Letters the indexes combine to show Thoreau appearing on 9 different pages. I'll let you dig those references out on your own since this is a blog and not a dissertation.

Suffice to say, Thoreau influenced in Kerouac in multiple ways. Are you starting to believe my oft-stated point that everything connects to Kerouac?

Posted by Rick Dale, author of The Beat Handbook at 9:54 AM