Today in history: Jack Kerouac and the Empire State Building 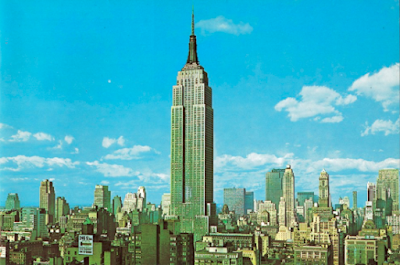 On this date -- May 1 -- in 1931 the Empire State Building opened in New York City. The general Kerouac connection here is obvious, given Jack's intimate familiarity with The Big Apple. But what has Kerouac written about the Empire State Building? I found this passage in one of my favorite Kerouac books, Lonesome Traveler, in a chapter titled, "New York Scenes":


Coming up that stairway, people stand there for hours and hours drooling in the rain, with soaking wet umbrellas -- lots of boys in dungarees scared to go into the Army standing halfway up the stairway on the iron steps waiting for God Who knows what, certainly among them some romantic heroes just in from Oklahoma with ambitions to end up yearning in the arms of some unpredictable sexy young blonde in a penthouse on the Empire State Building -- some of them probably stand there dreaming of owning the Empire State Building by virtue of a magic spell which they've dreamed up by a creek in the backwoods of a ratty old house on the outskirts of Texarkana. (Grove Weidenfeld, 1989, pp. 107-108)


Jack was only 9 years old when the Empire State Building opened. I don't know when he first saw it -- do you have information about that? If so, post it in a comment!

Posted by Rick Dale, author of The Beat Handbook at 10:37 AM