Filling in the Kerouac gaps

If you've read my book, The Beat Handbook, you know that each entry references a specific passage from either The Dharma Bums or On The Road. Originally, I was going to include those passages, but a NYC agent who deals with Penguin said I'd never get permission. So, I published it without the Kerouac passages, with an encouragement to readers to find them on their own. It's not that hard, given that my entries start at the beginning of The Dharma Bums and move through it in order, and then do the same with On The Road.

It came to me in a half-awake state this morning that I could easily, thanks to modern technology, share the actual passages here on The Daily Beat. So, I've decide to embark on a 100-day venture in which I will post a picture of the actual passage in Kerouac's novels that corresponds to a Kerouaction in my book.

Let's start with the cover, since you might want to know which version of Bums I used. 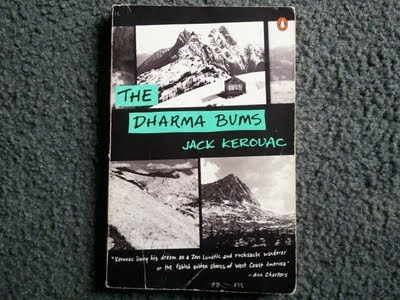 Now, Day 1 in my book is titled "Today's Kerouaction: On Vegetarianism." Here is the corresponding passage from Bums: 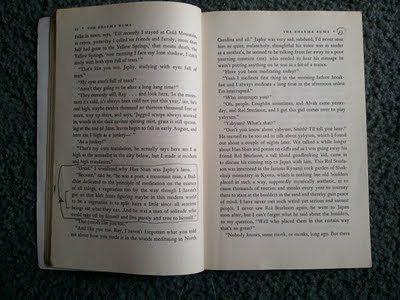 Let's hope I get into copyright trouble - it will be good publicity for my book.

Tomorrow: Day 2: On Sex as Meditation.
Posted by Rick Dale, author of The Beat Handbook at 10:44 AM

Email ThisBlogThis!Share to TwitterShare to FacebookShare to Pinterest
Labels: the beat handbook