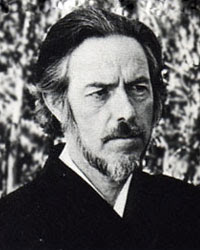 I want to do some more research into the connection between Jack Kerouac and Alan Watts, but here are some initial thoughts.

I've mentioned Watts in several posts on The Daily Beat (e.g., this one on January 1, 2009). It is hard to read about Jack at any length and not encounter Watts, if for no other reason than their common interest in Buddhism. In my view, Watts is one of the more interesting Western teachers of Eastern spirituality; in particular, I love his sense of humor. If you want an excellent introduction to Watts' teachings, I recommend "The Essential Alan Watts." Of course, as you can imagine, there are dozens of videos of Watts on YouTube. One of my favorites is a Watts recording that Trey Parker and Matt Stone (of South Park fame) animated called, "Life and Music." See it here. There are many others - just enter "Alan Watts" in the YouTube search box and be prepared to spend a few hours.

One of Watts' salient characteristics was that he was an autodidact. That has particular fascination for me, and I discuss that a bit in my post mentioned above. It strikes me that Jack manifested quite a streak of autodidacticity as well. Like Jack, Watts struggled with alcoholism, which may have hastened his death although he lived to be 58, eleven years older than Jack. Lest you think too harshly of Watts, remember that Buddhist master Chögyam Trungpa Rinpoche died at age 48 from cirrhosis of the liver stemming from his alcoholism. (Note to self: Look into the connection between studying Buddhism and alcholism.)

Watts shows up in two Kerouac novels, as Arthur Whane in The Dharma Bums and as Alex Aums in Desolation Angels. Since Jack's novels are largely roman à clef, you can get a sense about Jack's view of Watts from these two novels.

What I want to delve into here in a future post is what actually transpired when the two met face-to-face, as well as whether there was any written correspondence between the two. If you've got a research lead for me on the latter points, I'd love to hear about it.

In the meantime, if you haven't delved into the teachings of Alan Watts before, I highly recommend it. His autobiography, In My Own Way, is fascinating and not a bad place to start.
Posted by Rick Dale, author of The Beat Handbook at 8:54 AM

Informative and interesting Blog! Beautifully written, as usual, I like the post. Thank you so much for nice sharing with us. Keep posting!

The low down bum had more enlightenment than Alan Watts was my read on Kerouac's view on Watts. Jack is dismissive of him whenever Watts appears.