Here's the passage from On The Road that inspired Day 41 in The Beat Handbook: 100 Days of Kerouactions: 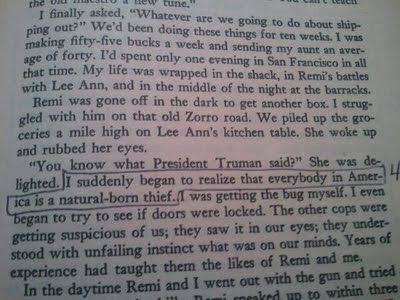 Bottom line: It's not beyond the beat way to steal shit from time to time. I'm not advocating breaking the law, but if you have to steal some food or whatever from a mega-corporation to survive, I say go for it. Try not to hurt anyone in the process. This does not include stockholders. Fuck them.

In this instance, Sal (Jack) and Remi (real-life Henry Cru) are stealing food from the barracks they are supposedly guarding. Remi justifies it by saying, "'Paradise, I have told you several times what President Truman said, we must cut down on the cost of living.'"

Sorry for the profanity. Well, not really. It's a sign of my frustration with the economy and the rich bastards who are reinventing the American Dream - for themselves only. Steal from them? I have no problem with it. Turnabout is fair play.
Posted by Rick Dale, author of The Beat Handbook at 6:00 PM

Beat poet Elise Cowen used to steal books from libraries and bookstores because she said it was "the only moral way to get books."
Love Remi, one of my fave characters...

They've stolen the middle class from us. It's time for us to do the stealing. If they just paid their fair share no stealing would be warranted. But I'm so fed up with the uber wealthy and greedy (there are uber wealthy who are not greedy like Steven King, Michael Moore, and Warren Buffet) that stealing is the least I'd like to see happen.