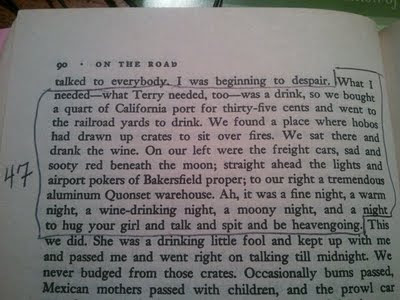 Jack doesn't say he was bored in the above passage from On The Road, but it did inspire me to write an entry titled "On Boredom" in The Beat Handbook: 100 Days of Kerouactions.

Why did I title it thusly? I can't recall exactly what was in my head in 2007 when I wrote that particular entry, but it struck me that many people complain of being bored. Given what Jack's example teaches us about how to have an interesting evening, complaining about being bored is rather unnecessary. You need booze, the outside, and company.

Booze? You are allowed to spend $3.38 (that's how much $.35 has inflated since 1947). Or you could use the five-finger discount method, although I discourage you from breaking the law.

Outside? Anywhere will do, but the higher the better (for the view), and water is always nice. But so is a jangly railyard. A fire is a nice touch, especially on a crisp night.

Company? Grab your sweetheart for one, and beyond that, go for the mad ones, especially bums and hobos if you can find 'em.

Bottom line: You're bored because you are boring. Sorry to harsh your mellow.
Posted by Rick Dale, author of The Beat Handbook at 5:00 AM

This is so true!