Day 45 in The Beat Handbook: 100 Days of Kerouactions is titled, "On Women," and references the below passage from On The Road. 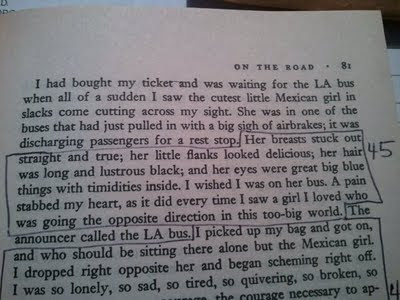 This passage has always resonated with me. It obviously resonates with others, too, since it is often quoted, especially the last sentence. I think it speaks to fantasy, and "what-ifs," and longing, and any number of other deep-rooted human drives. I can remember being in New York City in 1964 and seeing a girl sitting across from me on the subway and fantasizing about her, about being in love with her, and all the rest. I was nine years old! It was such a vivid experience that I remember it to this day.

It may be rather a male affliction, born of the hunter-psyche with which we are genetically predisposed. I don't know. I do know it's worth resisting for the right woman, something I'm not sure Jack understood.

Jim Carrey's character in Eternal Sunshine of the Spotless Mind fell in love with every women he saw who paid him the least bit of attention. In Jack's case, attention was unnecessary - he could fall in love from afar. It strikes me that falling in love from afar, like I did on the subway, is a strategy that ensures safety because there is no risk (intimacy) involved. But there's also no reward.

Even though he was married three times and had many lovers, Jack made his way through life fighting incredible loneliness. The world was just too much for him. At times it seems that way to each of us, and the only thing that gets us through is love. For Jack, even a promise of love was better than nothing, but, in the end, his only solace seemed to come from writing. Part of me is sad about that, and the other part is glad, glad that someone so affected by the world chose to write it down for me to experience in relative safety.
Posted by Rick Dale, author of The Beat Handbook at 1:38 PM