If you aspire to beathood, you must be thrifty. I wrote about this on November 20, 2008. The beats were green before green was cool because they acquired (I say "acquired because sometimes they bought, sometimes they bartered, sometimes the gave, and sometimes they stole) clothing, food, gasoline, cigarettes, and other necessities "on the cheap." 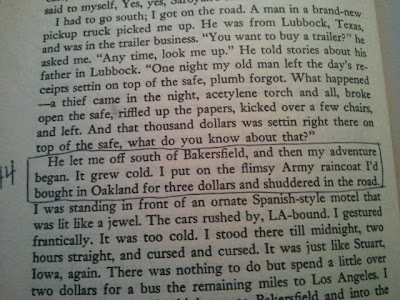 In fact, Jack got ripped off! But, assuming it was a used raincoat, at least he recycled.

Go to your local Army surplus, Salvation Army, Goodwill, etc., and donate a bunch of old clothes. If you haven't worn it in a year, donate it. You're allowed to pick up one item while you're there. Make is a plaid flannel shirt, a canvas rucksack, or a flimsy Army raincoat. In honor of Jack.

Oh, I almost forgot. This passage inspired Day 44 in The Beat Handbook: 100 Days of Kerouactions. It would be very thrifty of you to purchase one, read it, and give it away. There are even some used ones on Amazon!
Posted by Rick Dale, author of The Beat Handbook at 8:29 AM