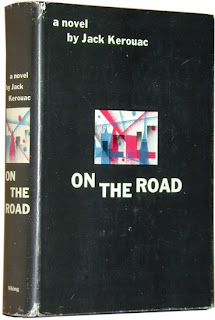 Not that Jack Kerouac needed vindication in my mind, but it's good to see that the Library of Congress has acknowledged (in its latest exhibit) On The Road as one of the 88 books that "shaped America." Jack would be happy to see the company he's keeping, given such entries as Jack London's Call of the Wild (London was a Kerouac fav), William Carlos Williams' Spring and All (Williams was an influence on the Beats), and Howl by distinguished-member-of-the-beat-triumvirate Allen Ginsberg. Jack might not be too excited that In Cold Blood by Truman Capote made the list, since Capote described On The Road as typing, not writing.

No matter, the Library of Congress has designated On The Road as one of 88 books that shaped America, and we agree. Click here for the entire list. Too bad they misspelled Sal Paradise as Sol Paradise in the description. This is their Office of Communications e-mail address: pao@loc.gov. Perhaps a few thousand of us should write and ask them to fix it.
Posted by Rick Dale, author of The Beat Handbook at 2:31 PM

ya think??? wonder how many backpacks you'd see everyday on everykid if not for Jack???