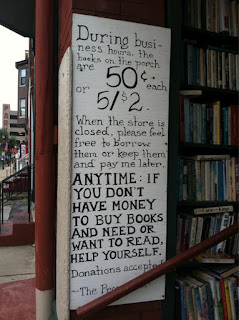 I love this sign. It shows a real passion for the importance of reading. As Carl Sagan said:


A book is made from a tree. It is an assemblage of flat, flexible parts (still called "leaves") imprinted with dark pigmented squiggles. One glance at it and you hear the voice of another person, perhaps someone dead for thousands of years. Across the millennia, the author is speaking, clearly and silently, inside your head, directly to you. Writing is perhaps the greatest of human inventions, binding together people, citizens of distant epochs, who never knew one another. Books break the shackles of time, proof that humans can work magic.

It got me thinking about making Kerouac more accessible. I've sent Kerouac novels at no charge to friends who expressed an interest, and I've given away more copies of The Beat Handbook than I've sold.

But what else could I do? Or we do? Used copies of Kerouac's novels are available on-line for 5 or 6 bucks (it looks to me like prices have gone up since the movie hit Cannes, but I can't confirm that) and probably cheaper at bookstores and yard sales. Maybe it'd be a good idea to buy a few copies of favorite Kerouac novels and have them on hand to give away when the situation warrants. I'm thinking I might keep a few copies in my truck.

For example, I was reading Dr. Sax at the Fat Toad (a pub) the other day, and there was a new bartender. She asked me what I was reading, and it led into a brief Kerouac discussion in which she said she had tried to read On The Road but couldn't get into it. But she seemed interested in taking another try (she was reading 50 Shades of Grey on her Kindle and so I felt duty-bound to encourage reading something half-decent - by which I mean something with some literary value and not something that isn't bawdy). If I'd had a copy of The Dharma Bums in my truck I would have gotten it and given it to her (perhaps with the request to pass it along when finished). I think that's more accessible to a first-time Kerouac reader than OTR. But that's just me - opinions vary.

Maybe we need to establish a "free Kerouac exchange" on-line. I know there's BookMooch (there are only 7 Kerouac books up there right now), but what I'm thinking about would be specific to Kerouac (or maybe the beat generation). Maybe it wouldn't be an exchange, but a place where you could post a Kerouac book that you are willing to send to someone free of charge just for the asking. If thousands of us posted one book, think of how we could spread the gospel of Kerouac at little cost to us individually!

Maybe we could all check the local library to see what Kerouac books they don't carry and donate one. That wouldn't take much effort and, again, if thousands of us did that it would definitely make more Kerouac accessible to more people. How about if thousands of us donated a copy of a Kerouac novel to a used bookstore with no strings attached? We could write a note on the inside cover that says, "This book was donated in the hope that whoever reads it will pass it along to someone else." We could leave copies of Jack's books on his grave with a similar note (I think I'll do that this October during Lowell Celebrates Kerouac). I know, only Kerouac fans are likely to visit, but what if someone was visiting with a friend? It might be an opportunity. Or maybe a note inside could encourage donating it to library or bookstore where the person picking it up is from (yes, you should leave it sealed in a baggie in case of rain).

That's the extent of my brainstorming at this point. What ideas do you have?
Posted by Rick Dale, author of The Beat Handbook at 1:09 PM

I just determined that our own campus library does not have a copy of Book of Sketches. Opportunity!