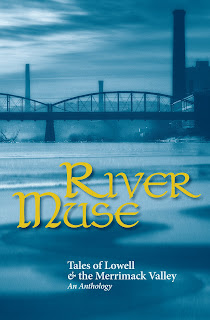 Click here for an article by Jennifer Myers from The Lowell Sun on June 10 about a new anthology (May 2012), River Muse: Tales of Lowell and the Merrimack Valley.

Here's what it says that's of interest to Jack Kerouac fans:

The book is like a Whitman's Sampler -- it has something for everyone, including three previously unpublished pieces by Kerouac, provided by his former brother-in-law and keeper of Kerouac's estate, John Sampas.

"I wanted to include more classic writers in the book, including Kerouac, so Dave Daniel approached John Sampas and was handed a file of 30 to 40 unpublished pieces and told to `take whatever you want,'" Corricelli said.

As a bonus, he and Daniel also scored two poems by Kerouac's boyhood friend and Sampas' brother, Sebastian Sampas, who was fatally wounded in the battle of Anzio while serving in the Army during World War II.

It's published by CreateSpace, an Amazon company on-demand publisher (formerly Book Surge, who published The Beat Handbook), and is available here.

Posted by Rick Dale, author of The Beat Handbook at 12:11 PM