Curation #156 from my Kerouac bookshelf: Surviving on the Streets: How to Go DOWN Without Going OUT by Ace Backwords 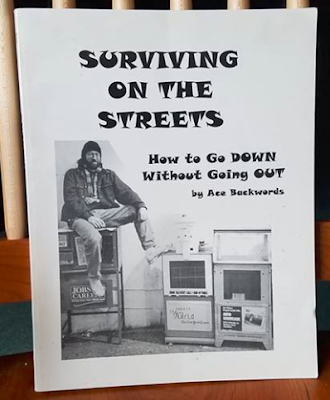 Item #156 in my Kerouac bookshelf curation project is this softcover 2001 Loompanics Unlimited edition (no printing number) of Surviving on the Streets: How to Go DOWN Without Going OUT by Ace Backwords. 195 pages, it measures about 8-3/8" x 10-5/8" and is in very good condition. The provenance is uncertain -- I thought it was an Amazon purchase but there is no record of it in my order history.

As its title suggests, this is a survival guide for living on the street. Author Ace Backwords (real name: Peter Labriola) is an interesting guy. He's a well-known underground cartoonist (e.g., for several years in the early 90s his work appeared monthly in High Times) and author/publisher (e.g., the tabloid Twisted Image; the book, Acid Heroes) who currently lives "on the street" in the Berkeley area yet maintains an on-going Facebook presence in which he opines about life, culture, politics, and the many feral cats he supports. I met him on-line through some kind of Kerouac connection I can't quite recall. Maybe he posted about Jack and I happened upon it via a search and sent him a friend request. Facebook is an impossible platform to retrieve past happenings from, so I am going from memory here.

Suffice to say, the Kerouac connection here is tangential at best. Certainly, Ace understands the term "beat" from personal and visceral experience, having lived on the street for many years. And Jack certainly could have been described as homeless at times. As to Ace's book, it is a compendium of useful, practical, honest, and gritty advice for living on the street. Ace learned a lot "the hard way" and wrote this book to help those who find themselves on the street and wondering how to make it. The book includes pictures -- some by Ace -- and a few of his Twisted Image (and other) cartoon strips. You can see his cartoon strips by Googling "twisted image ace backwords" and selecting Images.

Is this book a candidate for your Kerouac bookshelf? Yes, but only if you buy into my Six Degrees of Jack Kerouac theory for making such decisions. As an engaging read, though, you could do worse than pick up a copy of Surviving on the Streets. I am sure Ace would appreciate it (especially if he gets royalties).

Below is a picture of Shelf #5 (last one!) of my Kerouac bookshelf showing the placement of this book (10th from the top of the pile) on the day I started curating my collection. Next up: Jack Kerouac: The Bootleg Era: An Annotated List by Rod Anstee.

Posted by Rick Dale, author of The Beat Handbook at 10:22 AM