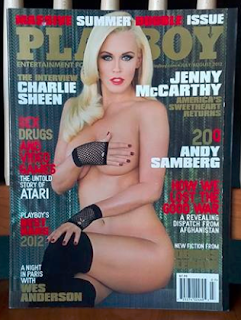 Item #167 in my Kerouac bookshelf curation project is this July/August 2012 issue of Playboy featuring an article titled, "The Lost Photos of Jack Kerouac." It's in very good condition and the provenance -- as best I remember -- is that I bought it at Barnes & Noble, embarrassingly in person.

The reason I bought this issue, other than to read the articles and the interview, was for the Kerouac piece. It's a set of never-before-seen photos taken by Robert Frank on assignment for Playboy in 1959 to take pictures of Kerouac. Frank was fresh off publication of his book, The Americans, for which Kerouac wrote the introduction.

I won't scan anything from the piece because my scans wouldn't do the pics justice and you can find them in the Playboy archive if you're really interested. As far as posting anything distaff from this issue, even the Jenny McCarthy (who I can't stand but photographs well) shots are no-go because of nudity. I'll probably get in trouble just for the cover shot. Since it's a double issue, there are two Playmates: Shelby Chesnes and Beth Williams. (Wow.) The interview is with bad boy Charlie Sheen.

I wrote about this issue when it first appeared -- click here.

Lost pictures of Jack Kerouac from 1959? This definitely belongs on your Kerouac bookshelf.


P.S. There are only two items left on my Kerouac bookshelf, meaning we will be ending this project with #169, coming soon. I may curate some other books that are laying/lying (take your pic - no one on earth has this one figured out) around the house but weren't on my bookshelf the day I started curating.


Below is a picture of Shelf #5 (last one!) of my Kerouac bookshelf showing the placement of this item (21st from the top of the pile) on the day I started curating my collection. Next up: Beat Generation: Glory Days in Greenwich Village by Fred W. and Gloria S. McDarrah.

Posted by Rick Dale, author of The Beat Handbook at 9:50 AM