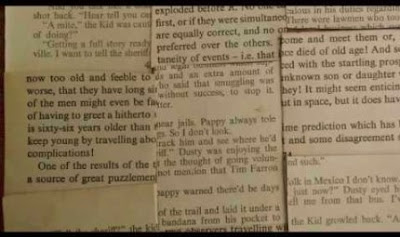 31 days ago we undertook what I call a "numerology project" in which we presented a sentence from a book on my Kerouac bookshelf each day that corresponded to the date and the book's placement on my bookshelf. On the 1st of the month we presented the 1st sentence of the 1st book, on the 2nd we presented the 2nd sentence of the 2nd book, and so on (seemingly ad infinitum). The project ended yesterday, April 1, because we started on March 2 and I wanted to capture a full 31-day month's worth of entries.

All that remains is to present the whole set of sentences in one post. That is what follows in block indent. Make of it what you will, I think it reads amazingly well in terms of coherence. For the copyright police, all these passages are cited in their relevant individual entry posted previously and available by clicking the first word of each sentence. It strikes me that this exercise has two Burroughs connections. One is the numerology aspect, with which he was familiar (click here). The other is that this is rather like his "cut-up" method, where new text is created by cutting up existing texts and randomly arranging the passages.

How do you think this came out?

This old Greek reminded me of my Uncle Nick in Brooklyn who'd spent 50 years of his life there after being born in Crete, and wandered down the gray streets of Wolfe Brooklyn, short, gray suit, with a gray hat, gray face, going to his various jobs as elevator operator and apartment janitor summer winter and fall, and was a plain old ordinary man talking about politics but with a Greek accent, and when he died it seemed to me Brooklyn hadn't changed and would never change, there would always be a strange sad Greek going down the gray streets.

Shortly before my birth my father had begun a small theatrical publication known as the "Spotlight Print," a unique weekly filled with news, comments, anecdotes, editorials, and advertisements dealing with the theatre [sic] and cinema of the time around Lowell and Boston.

Prior to that I'd always dreamed of going west, seeing the country, always vaguely planning and never specifically taking off and so on.


Before that I'd often dreamed of going West to see the country, always vaguely planning and never taking off.

Dean is the perfect guy for the road because he actually was born on the road, when his parents were passing through Salt Lake City in 1926, in a jalopy, on their way to Los Angeles.

Both the little bum and I, after unsuccessful attempts to huddle on the cold steel in wraparounds, got up and paced back and forth and jumped and flapped arms at each our end of the gon.

I was tremendously interested in the letters because they so naïvely and sweetly asked Chad to teach him about Nietzsche and all the wonderful intellectual things that Chad knew.

"Will you watch my pack while I run over there and get a bottle of wine?"

Drunken visitors puking in my study, stealing books and even pencils.

More reasons than one for the meeting in Pedro--he'd sent a gun ahead inside of a book which he'd carefully cut and hollowed out and made into a tight neat package covered with brown paper and tied with string, addressed to a girl in Hollywood, Helen something, with address which he gave me, "Now Kerouac when you get to Hollywood you go immediately to Helen's and ask her for that package I sent her, then you carefully open it in your hotel room and there's the gun and it's loaded so be careful dont [sic] shoot your finger off, then you put it in your pocket, do you hear me Kerouac, has it gotten into your heskefuffle frantic imagination--but now you've got a little errand to do for me, for your boy Denny Blue, remember we went to school together, we thought up ways to survive together to scrounge for pennies we were even cops together we even married the same woman," (cough) "I mean,--we both wanted the same woman, Kerouac, it's up to you now to help defend me against the evil of Matthew Peters, you bring that gun with you" poking me and emphatically pronouncing each word "and bring it on you and dont [sic] get caught and dont [sic] miss the boat whatever you do."

They hung on him for dear life, twitching to see each new joke he might choose next in his role as King's Comedian.

They were walking under immense beautiful dark-limbed trees of black winter, dark arms twisted and sinuous from sidewalk up; they overtopped the road, Riverside Street, in a solid roof for several blocks past phantasmal old homes with huge porches and Christmas lights buried deep in; real estate relics of when to be on the river meant and called for expensive building.

"And what for you want all those people?"

Aurora Borealis
over Hozomeen--
The void is stiller

So I knew they was a North Carolina, and they was a toad, and I dreamed of it 'at night.

This is the bottom of the world, where little raggedy Codys dream, as rich men plan gleaming plastic auditoriums and soaring glass fronts on Park Avenue and the rich districts of Denver and the world.

But in my first sandlot game in 1935, about October, no such crowd: it was early Saturday morning, my gang had challenged the so-and-so team from Rosemont, yes, in fact it was the Dracut Tigers (us) versus the Rosemont Tigers, Tigers everywhere, we'd challenged them in the Lowell Sun newspaper in a little article written in by our team captain, Scotcho Boldieu and edited by myself: 'Dracut Tigers, age 13 to 15, challenge any football team age 13 to 15, to a game in Dracut Tigers field or any field Saturday Morning.'

He could always manage to conceal his feelings.

I could hear it rise from the rocks in a groaning wush ululating with the water, sprawlsh, oom, oom, zoooo, all night long the river says zooo, zooo, the stars are fixed in rooftops like ink.

Ah just what I like to see in the morning, boys and girls.

See these men standing at windows, on which their names are written in gold letters, nodding down at the street when other townsmen walk by.

Thus I made that sky, I am the golden eternity.

They made many winsome moves, dropped casual shoulder silks, snaked their arms, arched their eyes, danced suggestively, caressed his wrists, some even pretended to be blushingly confused and removed roses from their bosoms crying "Oh is this yours or mine, youthful prince?" but in his mindfulness of woe the Prince was unmoved.

One of the sailors, a husky dark-haired pharmacist's mate, talked all the time about Roy Eldridge's trumpet and why he was ten years ahead of any other jazz musician except perhaps two others who jammed Mondays at Minton's in Harlem, Lester somebody [Young] and Ben Webster; and how Roy Eldridge was really a phenomenal thinker with infinite musical ideas.

Without Gerard what would have happened to Ti Jean?


Posted by Rick Dale, author of The Beat Handbook at 10:12 AM