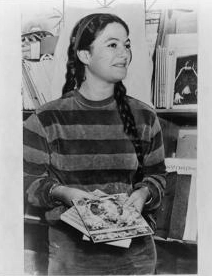 On this date -- October 18 -- in 2009, poet Lenore Kandel died. She appeared in Jack Kerouac's Big Sur as Romana Swartz. Kandel was born in New York City but moved to San Francisco in 1960. There she fell in with Gary Snyder et al. and became Lew Welch's girlfriend for a time. She was portrayed in Big Sur the movie by Stana Katic of  the TV series, Castle.

An interview with Kandel appears in Jack's Book: An Oral Biography of Jack Kerouac by Barry Gifford and Lawrence Lee (curated here).