Curation #148 from my Kerouac bookshelf: Jack's Book: An Oral Biography of Jack Kerouac by Barry Gifford and Lawrence Lee 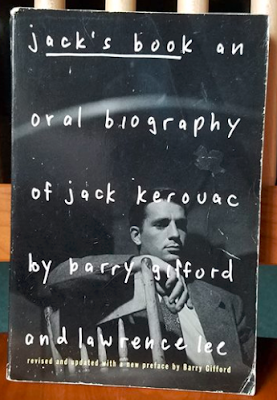 Item #148 in my Kerouac bookshelf curation project is this softcover 1994 St. Martin's Press 2nd printing of Jack's Book: An Oral Biography of Jack Kerouac by Barry Gifford and Lawrence Lee. 339 pages, it measures about 5-1/2" x 8-1/8" and is in good condition. The provenance is that I ordered it from Amazon on December 29, 2012. You're welcome, Mr. Bezos.

This is a biography based on a collection of interviews with many of the people who knew Jack Kerouac that were still alive in 1975 when the interviews took place. This is Kerouac gold for fans and researchers. As Gifford says in the introduction to this new edition (it was first published in 1978):


the idea being that since most of Kerouac's cronies and family members were still alive (he having died of alcoholism at the early age of forty-seven), if we could find and then persuade them to talk candidly about the subject, it would be left to us--and the reader--to sort through the revisionism and decide whose versions most closely approximated the ineluctable "truth."

Well, the authors succeeded in finding and persuading many of Jack's friend, lovers, etc. Following is a list of interviewees that appear in this book. The interviews are interspersed with editorial comments and biographical information.

Anyone with a passing knowledge of Kerouac's life can see the great importance of this list of interviewees. The book finishes with a character key to the Duluoz Legend, with which you can identify how each of the above real-life people was identified in Kerouac's novels. Or you could visit Dave Moore's excellent key here. There is also a bibliography and a helpful index.

If you have a Kerouac collection (other than his own writings) of only 10 books, this should probably be one of them, notwithstanding the minor criticisms in this 1978 NY Times review. Note the prescience of critic Richard Kostelanetz in saying that the scroll version of On the Road needed to be published.


Below is a picture of Shelf #5 (last one!) of my Kerouac bookshelf showing the placement of this book (2nd from the top of the pile) on the day I started curating my collection. Next up: Girls Who Wore Black: Women Writing the Beat Generation edited by Ronna C. Johnson and Nancy M. Grace.

Posted by Rick Dale, author of The Beat Handbook at 10:53 AM

This collection is one of my favorites, if for no other reason then it contains one of the few interviews with Alene Lee. Also of great interest is the interview with Jackie Gibson, and those from his boyhood friends in Lowell. RM