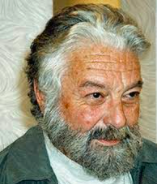 Poet Philip Lamantia was born on this date -- October 23 -- in 1927. He appeared in two of Jack Kerouac's works: as Francis DaPavia in The Dharma Bums and as David D'Angeli in Desolation Angels. Lamantia read at the famous event at the Six Gallery in 1955 that many point to as kicking off the San Francisco poetry renaissance. (He didn't read his own work, but rather that of his dead friend, John Hoffman.)

Reading some of Lamantia's poetry would be a Beat thing to do today in honor of his birthday. A brief bio and some of his poetry can be found HERE.

P.S. It's the 11-year anniversary of my mom's death, so this date has special significance for me.

Posted by Rick Dale, author of The Beat Handbook at 11:41 AM