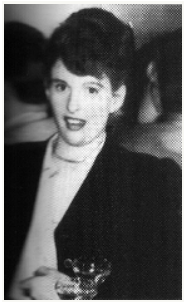 Edie Parker died on this date -- October 29 -- in 1993. She appeared in several of Jack Kerouac's works: as Marie in The Subterraneans; as Elly in Visions of Cody; as Edna in Book of Dreams; as Edna (Johnnie) Palmer in Vanity of Duluoz; and as Judie Smith in The Town and the City.

You may have fallen into the trap of thinking of Edie Parker as simply Jack Kerouac's first wife, and you would be wrong. Indeed, her apartment shared with Joan Vollmer around Columbia University in the 40s was the hub for gatherings of early Beat Generation figures and she was an active participant in the literary conversations with Kerouac, William S. Burroughs, Lucien Carr, Allen Ginsberg, et al.

Read her excellent memoir, You'll Be Okay: My Life With Jack Kerouac, to learn more about this influential Beat Generation figure. Click HERE for a brief bio.

Posted by Rick Dale, author of The Beat Handbook at 10:23 AM