Day 67 Kerouaction: On Money for Gas 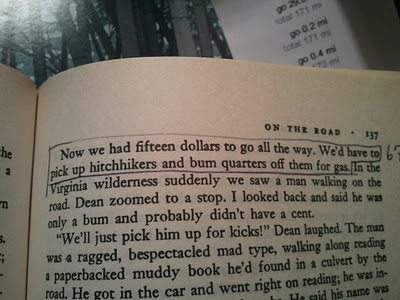 Day 67 in The Beat Handbook, titled "On Money for Gas," was inspired by the above passage from On The Road. Can you imagine in today's fiscal climate asking a hitchhiker for a quarter for gas? That's not a fair comparison, though, since a quarter in 1948 would be worth about $2.34 today.

Following Jack's lead, you could ask for a buck-and-a-half, and that would get you over half a gallon. In a fuel-efficient car, that would take you 15 miles or so, plenty of distance to find another hitchhiker and bum so more bread for gas. Of course, the famous big Hudson they rode in at least some of the way wouldn't have gotten nearly that many miles per gallon, so Jack et al. were definitely bumming lots of quarters in order to get very far.

Happy traveling....
Posted by Rick Dale, author of The Beat Handbook at 8:08 PM