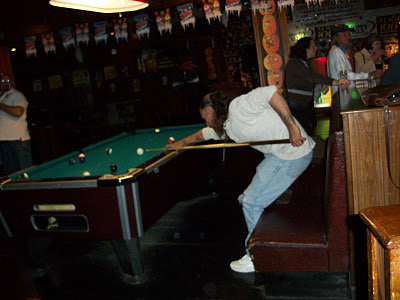 Friday night during the Lowell Celebrates Kerouac Pub Crawl, we were having a beer near the pool table in the back of Cappy's Copper Kettle. A rough-looking tattoo-sporting longhair was playing pool (see above), and he had actually ushered us to a couple of seats near the short bar by the table (his drink was sitting there and we didn't know if the seats were taken). While his opponent was playing, he would come over and drink. Out of the blue, he looked at me and said I looked like Kevin Nash (below). "Do you know who that is?" he asked. 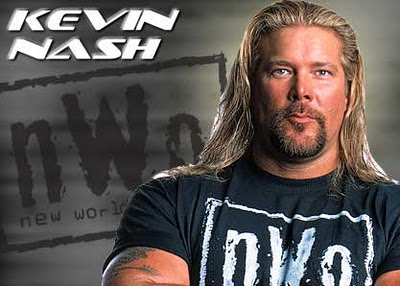 Well, as a matter of fact . . . . Click here for a synchronicity laugh.

Or maybe that guy reads The Daily Beat?

Anyway, I wish I were that much of a stud. I did tell the guy I took it as a compliment. He told us he fought Mixed Martial Arts and showed us his hands that he "broke all the time." We were toward the front of the bar later in the night and he shook my hand on the way out and said it was nice to meet us.

I love beat characters!
Posted by Rick Dale, author of The Beat Handbook at 8:55 AM