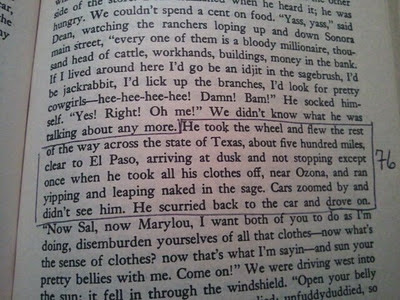 Today's Kerouaction is brought to you by the above passage from On The Road, which inspired Day 76 in The Beat Handbook, titled "On Nudity."

The beats weren't shy about nudity. Ginsburg often took off his clothes in public. It's an expression of freedom, and it's good for the soul. We are way too uptight about our bodies, and it's all cultural conditioning.

What's stopping you from taking off all of your clothes right now and running around naked?
Posted by Rick Dale, author of The Beat Handbook at 8:14 PM