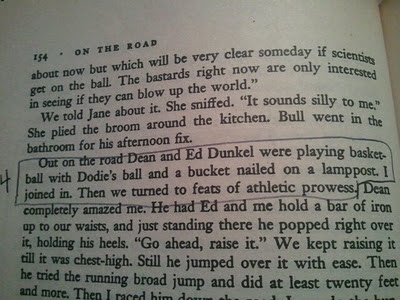 The above passage from On The Road inspired Day 74 in The Beat Handbook, titled, "On Games."

What does it take to have fun? Imagination. If you can throw it, kick it, climb it, or jump over it, you the have the making of a game.

I rather think the beats would have dug footbag. You might call it Hacky Sack, but that is like calling all facial tissue Kleenex and all copying Xeroxing.

Anyway, footbag was invented in 1972 by by John Stalberger and Mike Marshall of Oregon City, Oregon. It requires nothing but a footbag, some space, and a human or two (one is sufficient, as you can play with yourself). Alcohol helps, too, but it's not necessary. We stand in a circle and just pass the footbag around, seeing if we can score a "hack" (everyone gets to pass the footbag at least once without it hitting the ground). No hands allowed. We had an epic session in Joshua Tree N.P. in February 2006 involving Bushmills, but that is a whole other blog post.

If you invent a beat game, stay light on rules. Rules are for squares.
Posted by Rick Dale, author of The Beat Handbook at 7:35 PM

Thanks, Aleks. Will do.