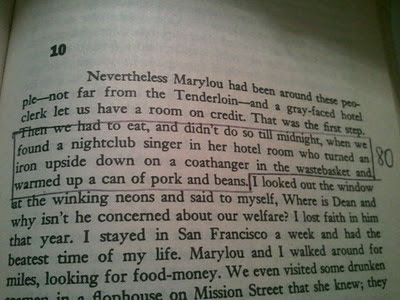 Day 80 in The Beat Handbook is titled, "On Improvisation." It references the above passage from On The Road.

At the heart of beat travel is "traveling light," which reminds me of a song I wrote called exactly that.

VERSE 1:
Outside the rain is falling
There's dampness in my soul
I can hear the freight train calling
But it's too cold to go

VERSE 2:
Well once I tried a workin'
But I never was on time
A time clock and a foreman'
Just ain't no friends of mine

Anyway, improvisation is an important skill in traveling light, as evidenced by the nightclub singer using an upside down iron in a hotel room to heat up a can or pork and beans. Heat is heat. Your car's engine block will heat up a can of pork and beans, too, but make sure you poke some holes in it (the can, not your engine block), or you might get a big surprise when you open your hood to dine.