Curation #82 from my Kerouac bookshelf: The Voice is All: The Lonely Victory of Jack Kerouac by Joyce Johnson 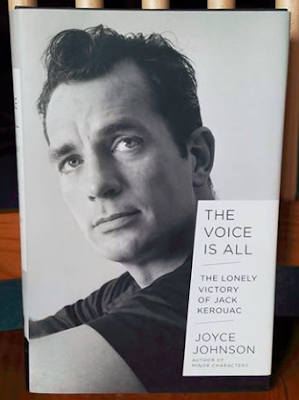 Item #82 in my Kerouac bookshelf curation project is this hardcover 2012 Viking 3rd printing of Joyce Johnson's The Voice is All: The Lonely Victory of Jack Kerouac. 489 pages (60 pages comprise the notes and index), it measures about 6-1/4" x 9-1/4" and is in very good condition. The provenance is uncertain but I probably bought it from Amazon or received it as a gift.

As the title suggests, this book is an exploration of how Jack Kerouac found his writer's voice amidst the conflict of being "caught between two cultures and two languages" (inside cover flap). It is a well-written book, which is no surprise given Joyce Johnson's credentials. She won the 1983 National Book Critics Circle Award for her Kerouac memoir, Minor Characters, to be curated later. Johnson was Kerouac's girlfriend at the time On The Road was published in 1957 (something she talks about in Minor Characters but not so much here as this story ends in 1951). She published a book of letters to and from Kerouac titled, Door Wide Open: A Beat Love Affair in Letters, 1957-1958 (also to be curated later).

Johnson based this biography in large part on her access to the Berg Collection's Kerouac archive at the New York Public Library (which you can read about here), access to which I understand is tightly controlled by the Kerouac estate.

You can read the NY Times' mixed review of Johnson's book here. And here is the Boston Globe's review, which nitpicks over Johnson's use of the term "joual" to refer to the type of French Jack spoke.

I liked this book. A lot. It was in-depth and engaging, and while I get the NY Times' quibble about not using actual passages from Kerouac's work, I don't think that omission interfered with the big picture Johnson paints here on how Jack developed his writing voice. Opinion, as always, vary. This Kirkus Review called the book a "triumph of scholarship."

I think this is an important contribution to the genre of Kerouac biographies and you'll want it on your Kerouac bookshelf.


Below is a picture of Shelf #3 of my Kerouac bookshelf showing the placement of this book (1st on the left) on the day I started curating my collection. Next up: Desolate Angel: Jack Kerouac, The Beat Generation, and America by Dennis McNally.

Posted by Rick Dale, author of The Beat Handbook at 9:01 AM