The mystery that is the Internet 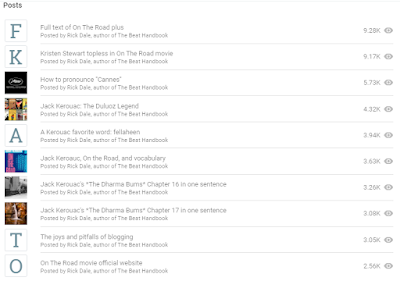 In the past we have delved into the all-time top posts on The Daily Beat as measured by number of pageviews. For the longest time, "Kristen Stewart topless in On The Road movie" was at the top of the list. Now a new top pageview getter has emerged: "Full text of On The Road" plus." The rest of the top ten hasn't changed much. Here are links to all 10 posts:

Full text of On The Road" plus

Kristen Stewart topless in On The Road movie

How to pronounce "Cannes"

Jack Kerouac, On the Road, and vocabulary

Jack Kerouac's The Dharma Bums Chapter 16 in one sentence

Jack Kerouac's The Dharma Bums Chapter 17 in one sentence

HERE is a link to a post showing the top-ten list as of February 2018. You can compare them and see that some posts have been replaced, but a number are the same. I'm sad that my free write post, "Dimetapp dream: Bottomless from bottom of the mind," is no longer in the top ten.

It strikes me that I cannot explain the reasons all of these posts are top-ten pageview getters. Kristen Stewart topless makes sense (lots of prurience). As does the full text of On The Road (lots of cheapskates). The rest have words that just as likely appeared in other posts of mine over the years, and I'm not sure what distinguishes these other than the possibility that some other blog or website linked to them -- something I seldom know about unless the linker lets me know.

Chalk it up to the mystery that is the Internet.

Posted by Rick Dale, author of The Beat Handbook at 10:32 AM