Today's Kerouaction
What would Kerouac wear for shoes?

Believe it or not, European designer Hogan has a Jack Kerouac Collection. Jack would eschew such spendthriftiness (let alone that the shoes are butt-ugly).

Sanuk makes a Sidewalk Surfer called the Kerouac. I own a pair of regular Sidewalk Surfers. My son Jason got them for me as a present. I could see Jack wearing a pair, but, again, too expensive for what you get.

For sure, Jack would wear "old black railroad shoes," as described in his play, Beat Generation. So what are they in today's terms?

A little research on shoes for railroad workers yields . . . not much. Here's a definitive article on how to pick a work shoe: If the Shoe Fits the Hazard, Wear It.

Certainly, a railroad worker would want safety shoes. That is, ones with steel toes and rugged uppers, etc. Red Wing makes one called the WORX. Here it is: Or maybe he'd wear a pair of Wolverines: 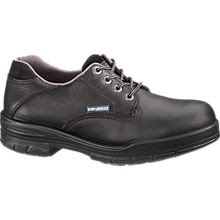 Then again, frugal Jack may go to Payless for the prices. Or better, he'd get a pair from the Salvation Army or Goodwill.

But I'd like to think Jack wouldn't skimp on shoes. He'd take his next royalty check and buy some nice Red Wings or Wolverines. Yass, yass. He'd walk 'em in good and they'd become old black railroad shoes fer shoe-ah!

Me? I'll stick with Keens.
Posted by Rick Dale, author of The Beat Handbook at 9:48 AM

Email ThisBlogThis!Share to TwitterShare to FacebookShare to Pinterest
Labels: shoes

I really enjoy your series on "On..."; you gather a great amount of useful background info, which helps me understand Jack's writing better.

Anyway, do you do requests?

Last week, after reading your March 13 post (On Spontaneous Writing), I wondered if Kerouac mastered any other language than English. The reason I am curious about this, is that when I write spontaneous ever more often I have a hard-time sticking to one language. Thoughts come in a certain language and I cannot translate them without losing the pureness of the thought or observation. I wondered how Jack would deal with something like that. Any ideas?

Thanks a lot in advance, and I'll keep on reading! Take care,

Thanks, Jess. I'll see what I can do with your question!